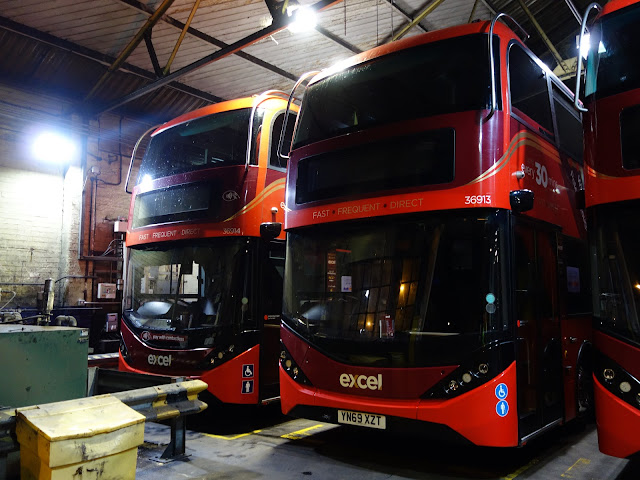 Well a year has passed since I last wrote an entry here. The fleet of Scanias continue to provide a comfortable and reliable service through the XL corridor and you would struggle to find a breakdown which is good news for consumers. Timetable alterations because of the pandemic meant a slightly reduced service operating at various times, notably between 1st February and 12th April when one of the Norwich - Dereham short turns was dropped from the schedule due to lower passenger numbers. Thankfully since the full service resumed, loadings have recovered greatly. 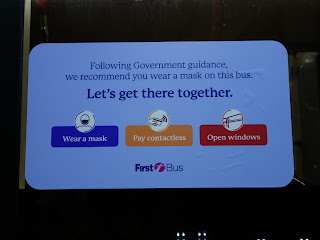 The Scanias have generally performed excellently (no pun intended). Geminis have made occasional appearances on the Dereham shorts. The remainder of 2020 saw 36168 on September 7th, 36171 on October 3rd, 36184 on 24th and 37571 on 26th & 27th, on the former date it actually operated a Peterborough service. November was a completely substitute free month and the last appearance of a Gemini in 2020 was on 5th December when 36269 finished a three day stint on the Derehams. 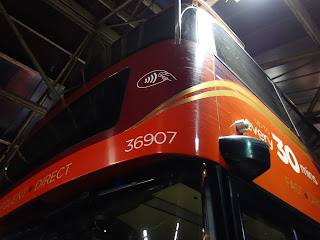 Since May 21st, one of the Dereham turns has often been a Gemini. This is a reaction to 36902 being involved in a collision on the evening of 19th May which will see it off the road quite probably until at least November. 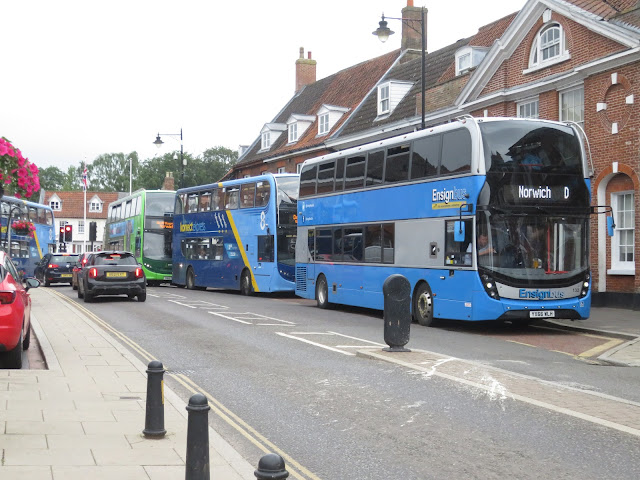 Since June 9th, a replacement vehicle has been sourced from Ensignbus and this has done much useful work on the Dereham services. It is an Alexander Dennis Enviro 400MMC and has been given fleet number 34432. More often than not, it can be found on diagram 23 which commences with the 07.30 Dereham - Norwich, finishing the day as the 17.20 Norwich - Dereham. With MOTs now taking place on the XL fleet, it is not uncommon for only one Scania to be available for the three 'D' diagrams and Geminis continue to deputise. Most interesting example noted has been Yarmouth's 37150 which briefly replaced 36168 on 15th June. as I write the loan Enviro has come over to King's Lynn for its own MOT, so a Gemini will now be deputising again.

Posted by Gerardtcc at 21:02 No comments:

Many moons ago, I wrote one of my very occasional blog entries about the new red Scania buses brought in to operate the XL service from Norwich to Peterborough. That's all a very long time ago now, in fact almost 6 months and hasn't a lot happened since ? Or to be more accurate, not a lot has happened since !

Going back to March 27th then and a much reduced service was introduced in response to the pandemic situation. From Sunday 5th April, King's Lynn depot temporarily closed and staff were furloughed while a skeleton service was operated by Norwich. This prevailed until 30th May after which King's Lynn resumed their role in running the service. From 7th June the full timetable was restored. Initially only 18 seats were available on each service to allow for social distancing, but this has been relaxed slightly recently.

Despite the situation, there have been some unusual sights on the route which I will briefly summarise here. 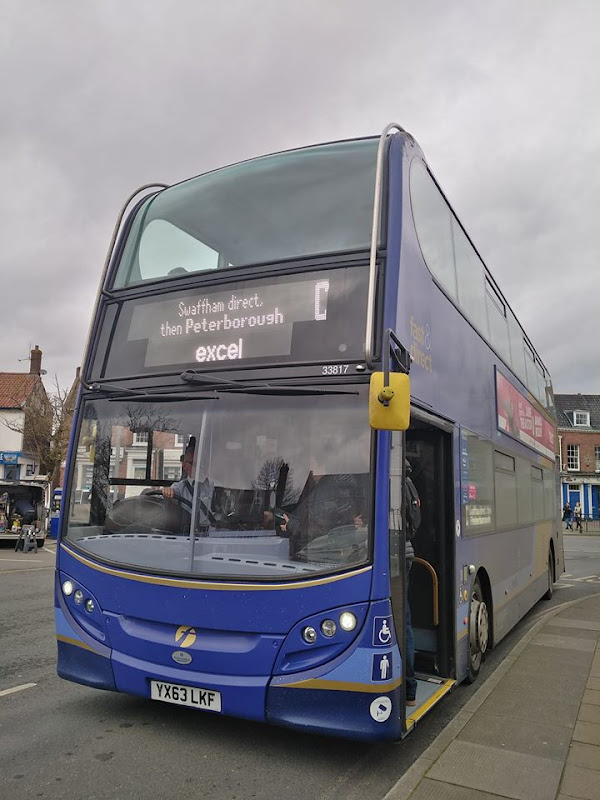 33817 on its final journey to Peterborough on 10th March. Photo : Dan High

Back on 10th March, 33817 became the final (at least for the moment) blue liveried Enviro 400 to reach Peterborough. Things then settled down until April 7th when yellow line 36269 worked diagram 4 - there were only 8 turns at this time, so this was something of a shock.

On April 5th, King's Lynn's allocation were moved to Norwich and Great Yarmouth and during the lockdown timetables, the Scanias put in much useful work on both the X1 and X2 routes east of Norwich. 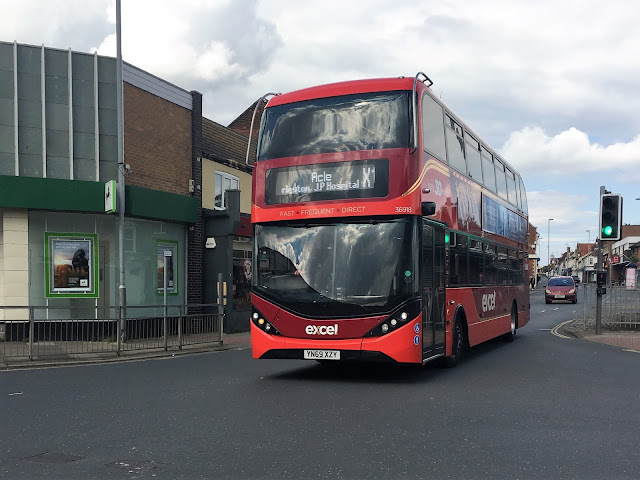 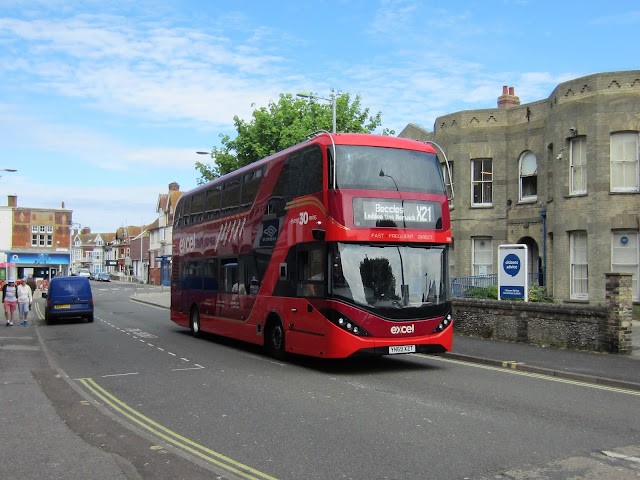 The Peterborough service was operated by Scanias 36901 - 36909 & 36911. 36910 had suffered an unfortunate accident near King's Lynn on March 25th and was at Full Circle being repaired, hence its omission. 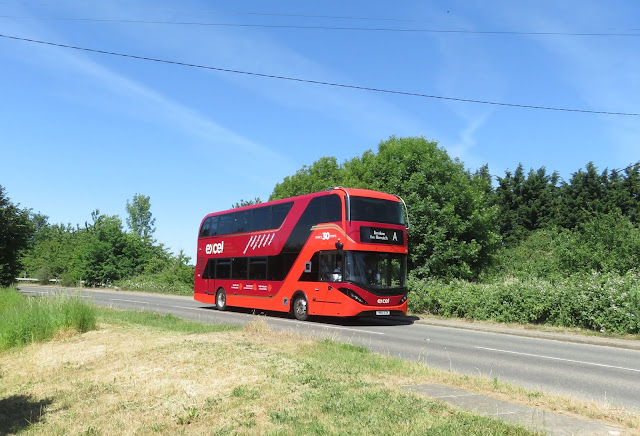 Right at the end of the emergency timetable on 29th May, the blue skies of lockdown find 36906 heading east near Walpole Highway 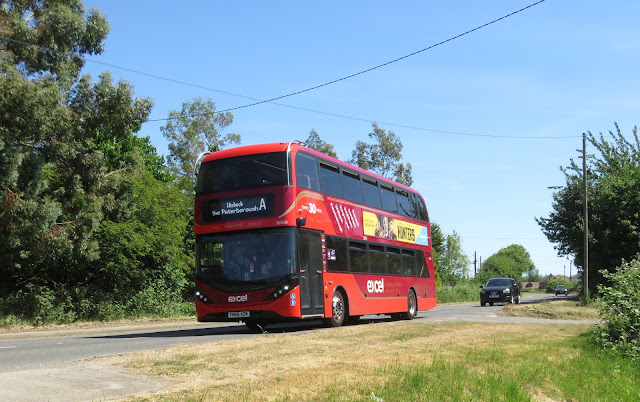 On the same day, 29th May, 36908 is on a Peterborough bound XL passing Boskoop Farm

Once the full timetable returned at the beginning of June, all the Scanias loaned to Great Yarmouth returned to King's Lynn and any shortfall was met by using a Gemini on one of the three Dereham 'D' turns. 36904 which had also been at Full Circle for repairs returned on June 4th just after the return of 36910.

16th June saw possibly the most outrageous working of the last decade when the bus scheduled to work the 19.40 Norwich - Peterborough had to be taken out of traffic at the last minute. In order to provide the service, Volvo B7 Plaxton President of 2002 vintage 32214 was commandeered to work in the place of 36916. It got as far as King's Lynn where 36914 relieved it and the old timer promptly returned empty to Norwich. 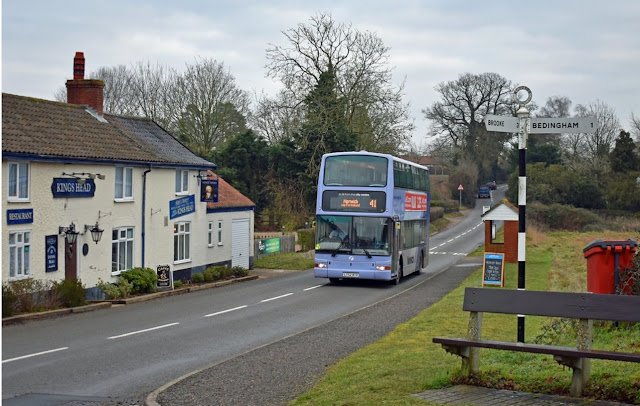 In the last fortnight of July, Gemini substitutions on The Dereham 'D' services once again became commonplace.

August though has been a better month so far, however, it was a case of deja vu today (Monday 17th) when Gemini 37579 put in an unexpected appearance working turn 6022 which involves two round trips from Norwich to Peterborough and the 21.40 Norwich - Dereham. For the record, the last time 37579 worked to Peterborough was almost 7 years ago when it was in white X1 livery on 5th October 2013 ! 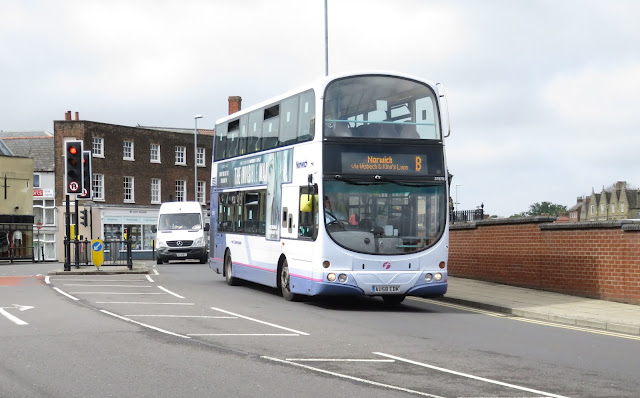 Overall the new Scanias have given very little cause for concern. Main hiccups have revolved around faulty destination displays and windscreen replacements taking longer to bond than on the previous fleet. Timekeeping has been excellent, although the current timetable is certainly generous in its allowances. Hopefully I will provide a further update in less than six months. Thanks to all who have continued to supply me with pictures and information. Special thanks as always to Bruce Billingham for keeping an eye on things.

Posted by Gerardtcc at 00:14 No comments:

So the first week of operation using the new fleet of Excel Scanias has passed relatively uneventfully. From what I can gather, Saturday was the first day where there were no Enviro substitutions. During the week 33805/811/817/818 were all used at various points. Of the new vehicles, all have been used on the route apart from 36901 which has had a few minor issues.

On the main route on Mondays to Fridays, King's Lynn send out ten buses and Norwich seven. Three of the latter are used purely between Norwich and Dereham, meaning in total 14 are used on the Peterborough service.


Timekeeping with the new Excel vehicles has been variable, most have been seen within 5 minutes of time. Drivers have been asked some interesting questions on the new buses, my favourite is the passenger who boarded one asking the driver "Is this red bus a blue bus ?" !

Posted by Gerardtcc at 23:54 No comments:

Today saw the introduction of the new XL fleet, which by and large was carried out successfully. The eye catching red liveried buses have brought new standards of comfort and facilities to the route.
Drivers seemed to be taking it very steady with the new charges today and most I saw were a few minutes late, however, 36907 working the 15.40 Peterborough - Norwich was seen entering Wisbech spot on time. The 08.10 Peterborough - Norwich started at Thorney with 33805 after an issue with one of the new buses and 33816 was also out during the day, but small teething troubles are always part of the introduction of any new fleet. A couple of buses were seen in service without working destination screens, something which has been immediately rectified, but having a code letter instead of XL is something which will take a little getting used to.
Here are some pictures from our photographers on the inaugural day.

Today was the last day of the 63 Reg Enviro 400s on the XL route. Preparations are complete for the first day of the new Scania vehicles tomorrow.
High winds did see a substitution late last night and for a time today when single decker 63325 was used. 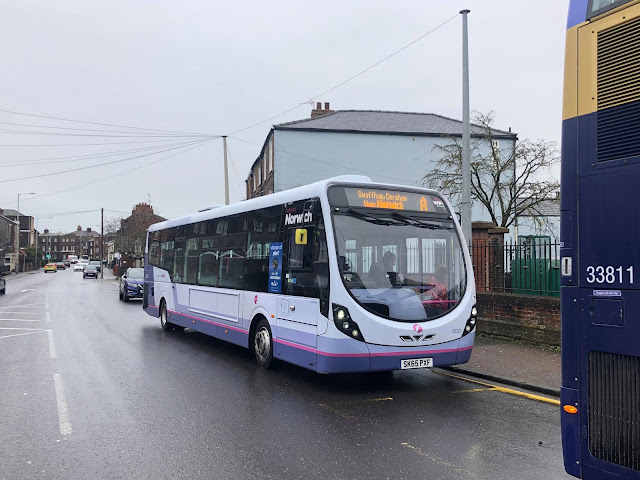 The Enviros performed well on their last day on the route, although 33805, 33811 and 33817 are to be kept at King's Lynn for a few days on standby in the event of any problems with the new boys.


Many thanks to Zak, Sam and Simon for helping me out with photos and the stories from today.
Posted by Gerardtcc at 21:55 No comments:

After what seems to be a long while with little to report, it's nice to produce a blog which is a little different.
Preparations for the entry into service of the new fleet are proceeding apace. The first one to pass through Wisbech to my knowledge was on Thursday afternoon when 36910 was used for tests on the public address system. It is seen below on its way back to Norwich and I'm sure that guy on the top deck is waving !! 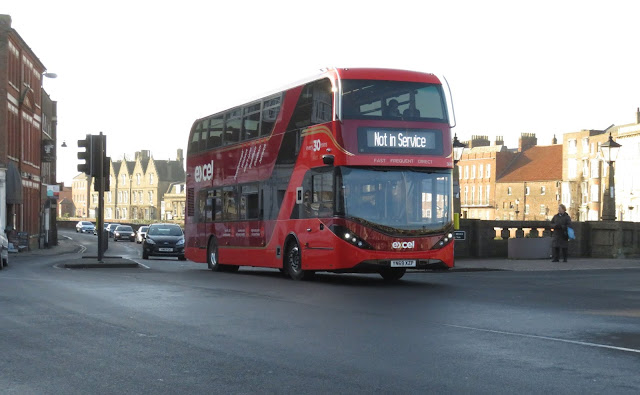 Since it was announced recently that First have cancelled the sale of their bus division - this was originally announced in May 2019, it is not surprising that their branding will after all be applied to the new fleet as seen here : 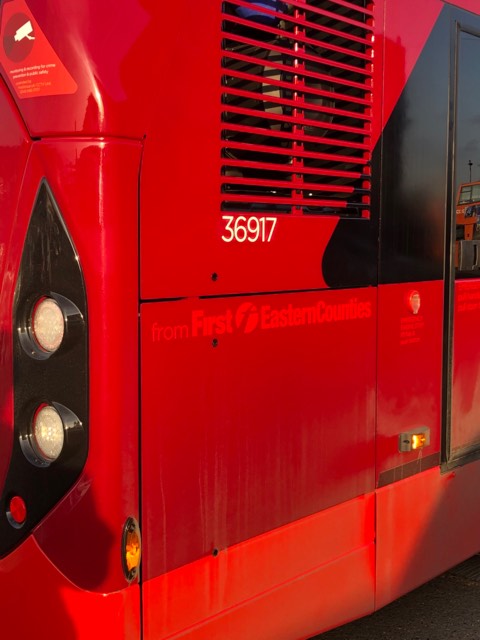 The entry into service, together with a new timetable will come into effect on Monday 17th February

Meanwhile, a rather unexpected event happened today (Sunday 9th). High winds and torrential rain hit the route courtesy of Storm Ciara which has caused havoc throughout the UK. A decision was made to replace the Enviro 400s on the route with single deck vehicles while the storm was at its height.
Here are a few pictures of the unexpected visitors performing on the Excel service - all didn't go well though as one had to have panels drilled and riveted after being ripped by the winds and 63321 suffered a coolant leak at King's Lynn on return from Peterborough, so the 16.10 to Norwich left with 33816. By this time the worst of the storm had passed fortunately.