Another omnibus blog entry as I continue to catch up with things.
Thursday was a poor day for sightings all round, but 37157 was seen by Malcolm working the 15.03 X2 off Lowestoft.
Friday saw 37159 stopped with a fuel tank leak and it has been off the road right through until today (Monday). Delays on Friday were heavy at one point. At 18.05 Bruce passed four X1 vehicles following each other up London Road in King's Lynn heading out of town. 37576 was on Y6 and then came 37157 heading for Lowestoft, 37571 not in service and 37569 also heading for Lowestoft !
37579 which had been on Y6 in the morning found itself ob the 15.03 X2 to Norwich instead.37575 was stopped at Lynn for rear end collision repairs. Des reports "Acle Straight closed from approx 11.00 am till 16.00. All X1 services via A1064. I was with 20126 on the 17.10 Norwich - Gorleston short, we departed on time but on the inward journey I had spotted an accident on Trowse bypass (A146). I had seen 37564 leave Norwich on time (16.55). I decided to take the A140 route out of Norwich. I caught and overtook 37564 @ Gorleston Library @ 18.12. He was approx 20 late."
Saturday saw my annual trip to Peterborough beerfest and my journey was aboard 37157 on the 10.48. Our departure from Wisbech was about 3 late and our amenable driver did well in the busy traffic. Shame the same can't be said about the top deck internally - look at the muck in here : 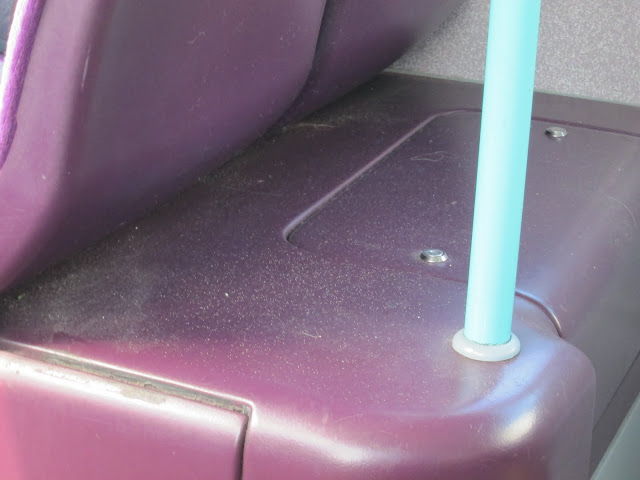 Posted by Gerardtcc at 22:28 No comments:

Well just when you thought it was safe, the X1 blog returns. After two weeks without a phone and then a further absence with me on holiday, I thought it was time to resurrect the old thing.
The period I have missed doesn't seem to be one where a great deal has happened. All the usual rumours are rife, but little has changed and loan Profile coach is still seeing almost daily use despite the Gemini fleet being back to full strength.
Here is a brief listing of the main goings on ...
Wed 3rd August : 37158 on the 11.08 X2, 37573 at Volvo. Malcolm reported 37565 15 late on K1, 20352 25 late on Y9 and 37160 17 late into Lowestoft on L11 and it was then 10 late departing westbound.

Fri 12th August : Ten of the nineteen turns were viewed, all seemingly without incident.

Mon 15th August : L10 had 37569 swapped for 37566 at lunchtime and later 37576 didn't complete Y13 because it hit a deer east of King's Lynn around 21.00. K15 with 37574 was 22 late westbound and 16 late eastbound through Wisbech this afternoon. Des says "Points of interest today -
In Norwich @ 06.50 road closed signs for A11 closed @ Daniels Rd roundabout closed (A11/Ring Road) as per all weekend, in place, but A11 open.
In Dereham @ 07.30 - Road signs for Market place closed from 09.30 - In reality, cenotaph roundabout partial closed, all traffic, in and out via inbound route under control.
(On afternoon journey, managed to negotiate Dereham, under board control, quicker than by normal traffic lights!!!)
Norwich - 15.55 to Low, bus 37159 (small luggage area) - 1 ridden wheelchair, 1 closed wheelchair, 4 extra large suitcases, 1 medium suitcase & 1 large holdall, do not fit into such a small space!!! Front O/S seat needed to accommodate all this luggage.

Many thanks to Bruce Billingham, Malcolm Hicks, Des Speed and many others for keeping me informed.

Posted by Gerardtcc at 13:56 No comments:

Well still no home phone or internet - good old BT Openreach ! My AOL address book seems to have been hacked in my absence too which is infuriating. I have changed my AOL password in the hope that this will stop my contacts receiving spam. Plenty to report when the full blog returns including a case of hot wheels and the return of 20126, somewhat briefly. My line is due to be restored today (Monday) ...... and last Friday and last Wednesday and last Monday........................Not holding my breath !
Posted by Gerardtcc at 10:45 2 comments:

Sorry for the lack of updates since Tuesday. My home telephone line has been down since Friday and I'm therefore writing this at work ! I hope the BT people will reconnect me sometime today (Monday) and then we will have a summary blog for the days I have missed. regards to you all, Gerard.
Posted by Gerardtcc at 12:40 No comments:

I am once more indebted to Des and Bruce for holding the fort for me today. I did, however, go for a drive out tonight and noticed the ad-man affixing new boards to the Gemini fleet. The two new schemes are predictably for films and were it not for this source of income, I suspect 'CBS Outdoor' - the huge advertising company responsible for these contracts - might have gone bust years ago ! 'Conan The Barbarian' proclaims one and 'Cowboys & Aliens' , the other.

So another new month dawns without sight of a B10M Premiere on the X1. The last such working (excluding the Gorleston - Norwich shuttles) was 20126 on 15th June. Yes July passed without any coaches working save the borrowed 20352. This was back on K3 today, though surely its loan must be nearing an end with 37577 now back on the road ?
One thing I forgot to mention was Rob Brooks identifying the mystery Excel coach seen at Shoebridge's in Wisbech, it was not a First Eastern example. I'll confirm its identity with Rob and let you all know, having succeeded in losing his original text !
Bruce was blogger in chief again today, providing a full list of sightings and nearly all punctual. His main query concerned the non-appearance of 37565/6/7. Well this was because 567 is on MOT prep and the other two were involved in the Volvo gearbox modification programme.
Grahame Bessey noted 37577 departing Lowestoft on L12 this morning and points out something I forgot to mention, this being that it is now minus 'First' logos on the front and is therefore easy to spot from a distance. 37159 is also in this condition, but in B7 livery of course. Malcolm noted 37157 on K5 arriving 9 late into Lowestoft this afternoon and a comprehensive list of weekend sightings too, helping me piece things together. Des reports 34109 on the 08.52 Yarmouth - Norwich shuttle & 09.40 return.
Posted by Gerardtcc at 00:34 No comments:

37570 required a front windscreen repair after working K3 yesterday, but it also seems to have been serviced today (can't remember that happening before on a Sunday !). With all the work done, it was fit for working K6 today. This is the turn that does Lynn - Peterborough - Lowestoft and then works the Martham service.
37156 was viewed on K1 15.10 ex Peterborough this afternoon, which is also unusual. It transpired that it had replaced 37568 at Lynn on the 13.50 westbound after passenger illness.
37567 is off the road until Thursday now for MOT prep work. An accident at Tuddenham caused some delays to afternoon X1s today.
Posted by Gerardtcc at 20:09 No comments:

On days like today where I don't get to see the service much, many of you combine to give a full picture of events. Going back to yesterday, Marcus says that some of the delays were caused by an A47 accident between Guyhirn and Wisbech during the morning.
Des reports that the overheating problem with 37156 seems to have been cured - today its temperature gauge was reading a normal 78, rather than the 90 which has been commonplace of late. 37156 was working Y10 today and was seen this evening heading for Peterborough 15 late at Tilney.
This delay seems to have been the exception rather than the rule today though. One other late bus was Y7 with 37576 which was 19 late from Lynn on the 11.32 to Lowestoft, but had made up 7 minutes of this by Yarmouth.

With 37577 returned and 20352 still on the route, there was a surplus of buses today (yes honestly !). 37564 and 37159 were both kept at Lynn for oil and axle checks, while 37571 was spare at Lowestoft - no reports so far of it being in use though.
After its escapades around Lowestoft, 20352 returned to the X1 today, being used on L9 which finishes at King's Lynn. The quick turnover of Geminis at Volvo for the gearbox mods saw 37566 absent for attention today, it is also having its 'drive green' settings sorted.
Posted by Gerardtcc at 19:52 No comments:

I'm hoping to resume the blog entries tomorrow, but in the meantime have a look closely at this picture of 70000 'Britannia' at Yarmouth last month, Richard Adderson who took the picture says "I don't know Gerard, the X1 gets everywhere !!" 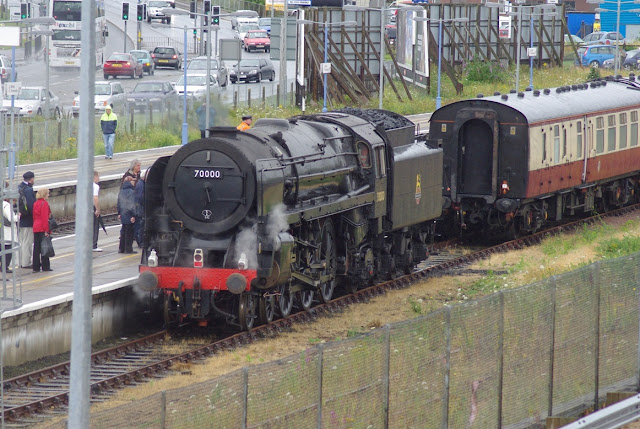 Posted by Gerardtcc at 23:19 No comments: