Well here we are again, I've been away for a short break, but thanks to my regular team for keeping an eye on things for me.
There have been many route diversions / incidents since the last report which can be summarised thus :

June 5 : Temporary A47 closure near Dereham, Toftwood not serviced for a while. Southtown Road, Yarmouth temporary closure

I make no apology for 'pinching' some of the above from the X1 Twitter pages, but it shows the sheer amount of dilemmas the X1 team have to face on an almost daily basis. Check out the Twitter feed at :


There were a few unusual sightings at Lowestoft early in the month, not on the X1 though ! Malcolm reports 42358 operating the 09.25 X2 from Norwich on both 3rd & 5th June, 66126 was a surprise on the 10.40 1A to Martham on 4th and on 10th 34114 arrived on the 08.59 from Martham. Generally speaking X1 arrivals in Lowestoft have been punctual but on 14th, K6 arrived 16 late with 33812 and Y7 which was next in arrived 10 down with 33804.
The X1 fleet continue to behave pretty well. 33809 had an MOT on June 6th and 33818 was also treated a week later, while 33814 had a couple of days off that week for hydraulic tank attention.
33823 returned to traffic after repairs on June 2nd but currently has a fault with its rear destination as seen in the photograph here taken by Cameron Robinson in Gorleston High Street on 15th June.
33824 made a visit to Full Circle for minor accident repairs between 9th & 12th. 33809 is currently sidelined again and has not been on the road since being removed from K16 on 12th.

A Sunday swap occurred on 9th when 33819 had a fluid leak in the drivers cab, 33823 replaced it on L10.
The North Pickenham accident on 9th delayed a few morning services, westbound 33811 passed Wisbech Town Bridge 23 minutes late at 10.42 on Y9, L10 with 33807 came back from Peterborough just 12 late though and then normality resumed. I took advantage of the new Wisbech Tesco stop that day and boarded K14 12.58 Wisbech - Peterborough with 33822 (the bus I always seem to get). The driver couldn't get reverse gear to leave Wisbech bus station and had to switch off the engine before it would engage. Departure was 8 late, but it came back from Peterborough just 2 minutes late. On June 11th K15 and K16 passed Bruce at Walpole Highway within 5 minutes of each other, 33807 at 13.44  following 33809 which was about 30 late, but other services seemed to run to timetable.
A special X1 fare after 19.30 hours has been introduced during the World Cup - passengers can travel for a flat fare of just £1 for the duration (£1 fare only available in Norwich zones 1 - 5 and Yarmouth town to JPH.) Hopefully this will last longer than England's involvement which after tonight looks doomed.

Zak Nelson, webmaster of Norwich Bus Page kindly sent in a report with some photos of some X1 exiles. He says "I visited Chelmsford yesterday (12th) on bus spotting duties. I've now finished college so have a lot of free time on my hands! Whilst there I spotted some ex-X1 coaches operating the X30 from Southend to Stansted Airport in the form of 20500 AO02RBX, recently repainted into a special AIRCOACH version of the new livery:
Meanwhile 20501 AO02RBY was parked up at the famous Westway depot in Chelmsford which I was kindly allowed to be shown around. The latter was still in her old X1 livery, minus any route branding as seen here : 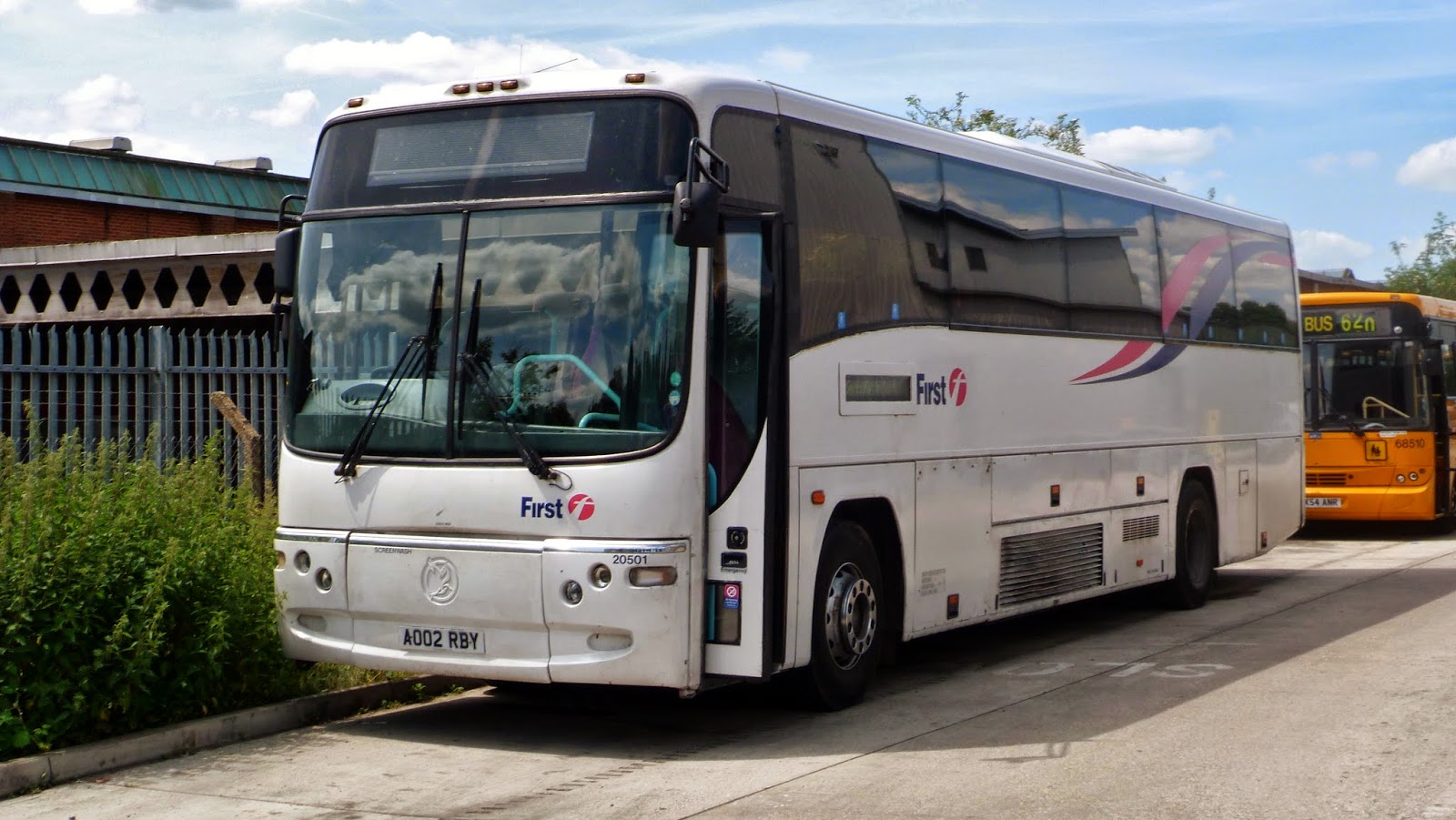 The new livery is seen again below, here on the rear of 20500 which has had a very close encounter with a local bus due to the tortuous nature of Chelmsford bus station : 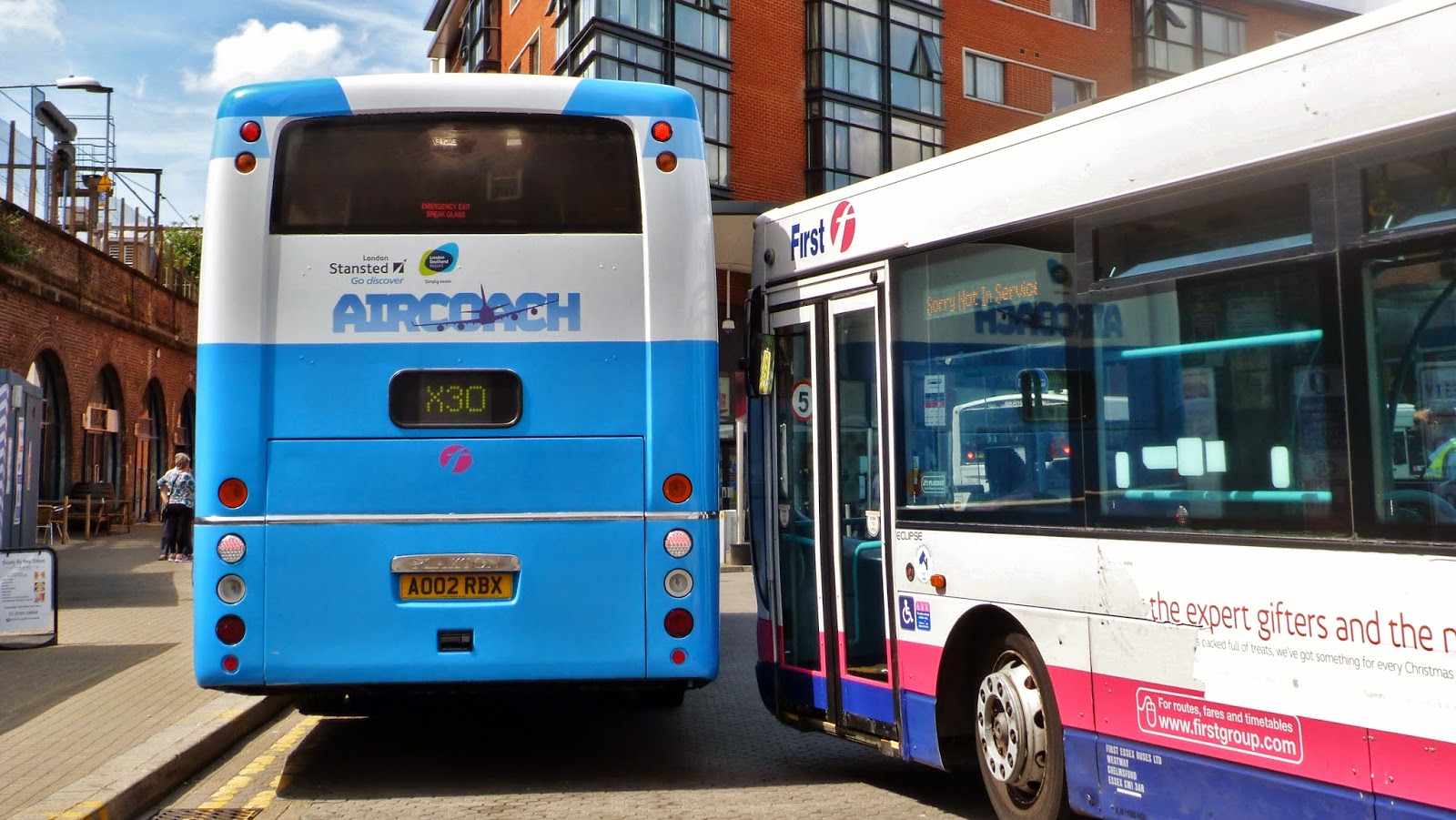 Thanks to Zak for sending the report and photos. Whilst on the subject of redundant X1 coaches, Kieran adds "Saw 20515 outside First HQ in Rouen Road, Norwich on June 5th" and here's the picture to prove it :

Peter has been making his usual trips aboard the X1 and has sent in a few photographs of interest. Firstly on 11th, Peter was on board 33804 working the 16.50 King's Lynn - Peterborough running some 20 minutes late due to the delays between East Winch and the Hardwick Roundabout. The next bus (33819 for the 17.20 departure) was only just behind and was passed at King's Lynn swimming pool as seen here.  Peter also sent me some pictures taken this evening (19th) of an X1 taking the diversion via South Lynn - this is due to the slip road onto the bypass being closed for a few days and not as Peter surmised so that the driver could avoid the average speed cameras which have been temporarily installed on the affected section of the A47 !

I can now reveal the changes I forecast a while ago in full. The splitting of the X1 route will be effective from July 27th. Services will operate at a 20 minute frequency from Norwich to Lowestoft calling at Acle, Yarmouth and stops to Lowestoft and on the western section the half hourly frequency will remain between Norwich and Peterborough, but without the lengthy, in terms of time, diversion through Toftwood. The approach to Dereham through Scarning will be used instead as was formerly the case.
Lowestoft and Yarmouth drivers will share the eastern section and the Peterborough service will be operated entirely by King's Lynn based drivers. Seven Enviro 400s will be transferred to Great Yarmouth for maintenance purposes. It remains to be seen whether these changes will be temporary covering the period of the Postwick Hub roadworks, or whether this will end up being a permanent situation.

It is almost two weeks since we took a look at how the service has been running. Generally speaking buses have been running a few minutes late due to the usual problems here and there on the A47. Just as well it was only minor delays judging by the large numbers of friends of mine who seem to have taken to the new buses. Scarcely a day goes by without someone surprising me along the lines of "We took the X1 to Peterborough/Lynn /Norwich (delete as applicable) the other day, we're definitely going on it again".
Tuesday 20th saw a very rare breakdown in traffic. 33810 which had arrived in Peterborough on K5-XL11 at 18.44 failed with the oil cooler problem and the King's Lynn rescue van was sent to its aid. It wasn't out of traffic for long though as it resumed work with K19-XL06 on Friday 23rd. On election day, Thursday 22nd Malcolm saw 33806 arrive in Lowestoft 'not in service' before departing on K18-XL04 11.00 to Peterborough. While on the afternoon of Friday 23rd, K14 -XL01 was delayed and Bruce saw it go by eastbound 14 late (due past him at Walpole at 14.46 but passing by on the stroke of 3pm), 33805 was the culprit. 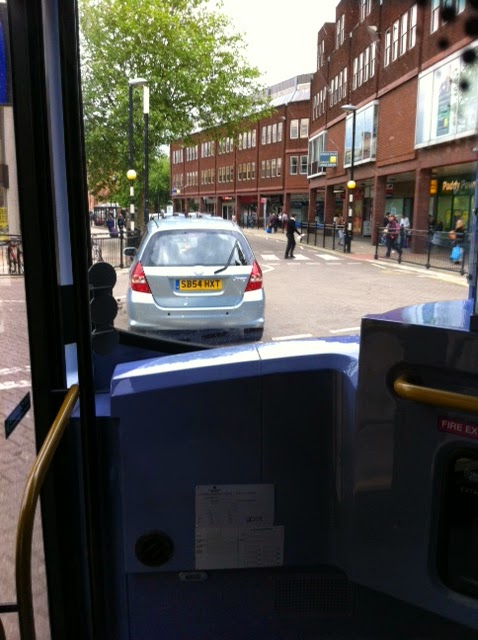 Peter says "I turned up for
the 17.20 departure from Peterborough railway station, but caught the 16.50 with 33813 running 15 minutes late. Very friendly driver called Alan who actually thanked people for travelling with the X1. Top marks from me. We came out of Peterborough via the Passport Office route (pictured left) which is unusual".

A funeral and election duty saw Bruce take command of sightings for a few days, all passing reasonably uneventfully. Tuesday 27th May (after the Bank Holiday) saw minor delays and Y7-XL13 was 14 late into Lowestoft during the afternoon with 33816. Neither  Wednesday or Friday last were good on the punctuality front as half term traffic took its toll. 28th saw 33810 arriving in Wisbech 15 late for the 11.55 to Lowestoft (Y9-XL15) and K18-XL05 14.58 Wisbech - Peterborough passed me 15 late with 33807. Peter reports that on Thursday 29th, some X1 services were disrupted by queueing traffic on Bourges Boulevard in Peterborough. The 08.48 from Wisbech was one of the services affected, see Peter's picture : 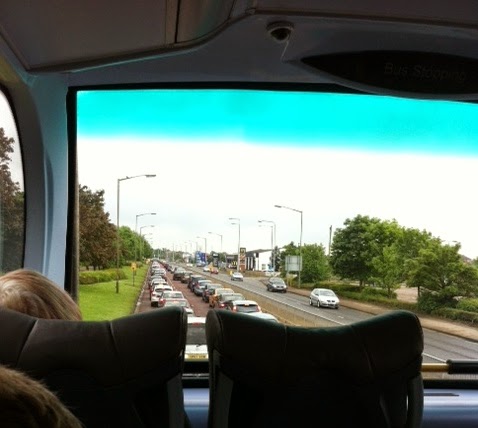 Friday was the worst day for a little while. It was Ok until lunchtime, but then Bruce spotted K14-XL01 12.20 King's Lynn - Peterborough sailing down the A47 bypass 26 minutes late. It was only 5 late returning into Wisbech where we discovered its identity to be 33809. Things improved momentarily with K18-XL05 being spot on time, passing me at a few seconds before 15.00, however, K19 due 30 minutes later popped up at 15.49, 19 late with 33813 and then we witnessed the very rare sight these days of two Peterborough bound X1s following each other. 33814 passed me at 16.30, exactly 30 late on K1-XL07 having been preceded by two car lengths by 33812 on K2 running on time !
On the vehicle front there have been few incidents, but 33823 has been off the road since the evening of 24th with a transmission fault and wiring problems. AD staff have been in attendance on more than one occasion as this vehicle seems to have more than its fair share of faults. It managed 4 miles on test runs during the last week, but is still currently unfit. 33811 continues to lead the way on the mileage front with 77,700 miles recorded as of the evening of Saturday May 31st.

Posted by Gerardtcc at 20:18 No comments: