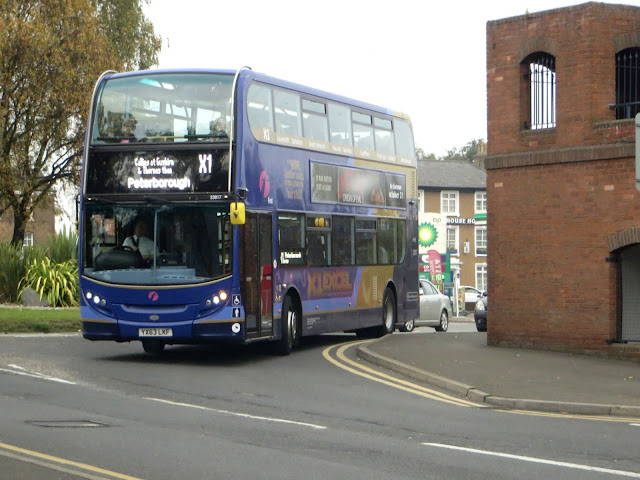 It's been a long drawn out affair, but finally in the last week all 15 King's Lynn based Enviro 400s have been in operation on the X1 route.
The two loan Geminis which were helping during the crisis in October were last used on 24th October (36169) and 3rd November (36190). Enviro 33821 which arrived to assist at King's Lynn on October 12th is, however, still on loan and has worked on pretty much a daily basis since its arrival. It is noticeable by the lack of X1 branding and route itinerary compared to 33803 - 33817, see picture below. 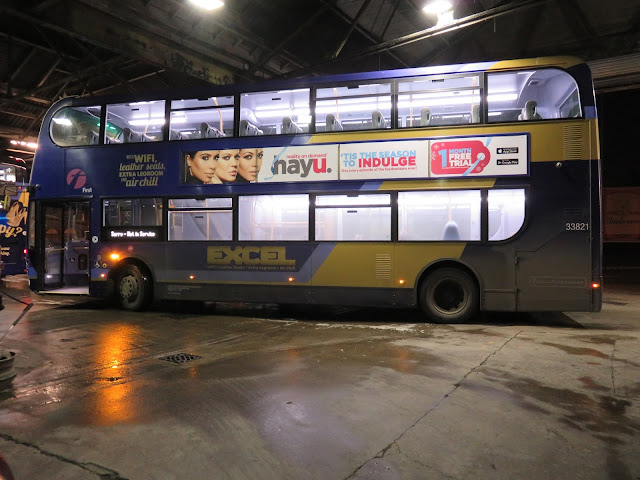 The continued loan of 33821 has been to cover for vehicles away for gearbox attention, engine problems and bodywork repairs.

I last monitored individual bus mileages on January 7th and so I can update this to December 23rd. During this period of 50 weeks, the mileage covered by the King's Lynn examples was as follows :

The highest mileage bus 33812 nearly came out on top again, only beaten by 33804. 33812 has now travelled 362,126 miles since new just over three years ago.
At the other end of the scale the vastly reduced accumulations for 33814/15 reflect the long periods out of traffic this year. 33803 remains the lowest mileage of the Lynn fleet at 305,381. Loan bus 33821 has only amassed 287,204 due to its normal use on the shorter journeys at the eastern end of the route.
Since the 20th December there has been an opportunity to see three of the fleet without any advertisement boards and only three buses still have boards on both sides, this is thought to be due to an industrial dispute.
The last week has seen services during the middle of the day at times of Christmas peak traffic being diverted via Wisbech St. Mary not serving Wisbech Tesco and Weasenham Lane stops.
During a comfortable journey on 33804 on 17th December I noticed a blip on the scrolling information screen upstairs. After we passed Eau Brink eastbound, the display said the next stop was Dereham Sandy Lane for a couple of minutes before reverting to the correct South Gates stop !

Malcolm Hicks reports that the ex-Leeds Geminis are becoming increasingly common on the Eastern section now, while on 9th December 30900 came into Lowestoft on the 09.15 from Norwich.

I hope you all have a splendid Christmas and a great 2017. Cheers Gerard