A quiet period since the last posting, although vehicle shortages at Great Yarmouth have been responsible for some older buses appearing on the Norwich to Lowestoft section of the X1.
Problems with the Enviro 400s have included 33807 requiring a new gearbox which was fitted at Great Yarmouth. 33807 was out of service between 2nd & 23rd August and also in trouble is 33822 which requires major attention. It was last reported by Malcolm in service on 15th August.
The bus rally season has its climax on September 21st with Showbus once again being held at Duxford. King's Lynn depot will be taking an Enviro 400 (rumoured to be 33813) to the event and elsewhere it is reported that 33423 will also be in attendance - plans to paint this and two of the X1 Geminis in the blue livery which adorns the Enviros have drawn negative feedback from some enthusiasts. On the positive side, this will mean spare blue liveried vehicles will be available to serve the western part of the route when required without the Great Yarmouth branding, which does look a little odd in Peterborough - especially if the bus is only travelling as far as Norwich !

I had a couple of X1 days out recently and on Friday 22nd visited Peterborough. The diversion which was due to finish at the end of the month, but which now seems destined to be extended, via Weasenham Lane adds about 3 minutes to the average X1 journey. My return on the 14.45 eastbound was not without incident. Traffic congestion was in evidence immediately after rejoining the A47 at Thorney bypass roundabout. We crawled through to Guyhirn and then took the diversion via Wisbech St. Mary to avoid a broken down car on Guyhirn Bank which was causing huge tailbacks. This was my first time through here on a bus since the 1970s ! We met a westbound service on Barton Road also using the alternative route. As is often the case on a Friday, the timetable became fiction, and Jamie who was on the service following ours actually arrived here over an hour behind us. Two buses had apparently arrived at Peterborough simultaneously and one went direct to King's Lynn to regain some time.

Friday 29th also saw the service disrupted when a car and a motorcycle were in collision near the Pullover Roundabout at around 11.15. Bus diagrams went out of the window and the late running 13.15 King's Lynn - Peterborough with 33803 was terminated at Wisbech. It then ran empty to Thorney to form the return working. Buses were swapped randomly and 33814 which had worked the 14.15 Peterborough - Norwich was turned round at King's Lynn to form the 15.45 back to Peterborough. Delays were considerable with 33810 on the 11.35 Lynn - Peterborough passing Bruce at Walpole Highway 41 late. The previous service came back from Peterborough 48 late with 33806 departing Wisbech  at 14.13.
Saturday 30th also seems to have suffered, though I am not certain why. The 15.15 King's Lynn - Peterborough ran around 35 late and the bus following it, 33808 was noted at Walpole Highway heading back east at 18.48, 29 late.

Currently 33816 is undergoing modification to the hydraulic oil cooler fault, while 33807 seems to have settled back into service after sounding rather noisy on its first day back on the road.

Posted by Gerardtcc at 19:35 No comments: 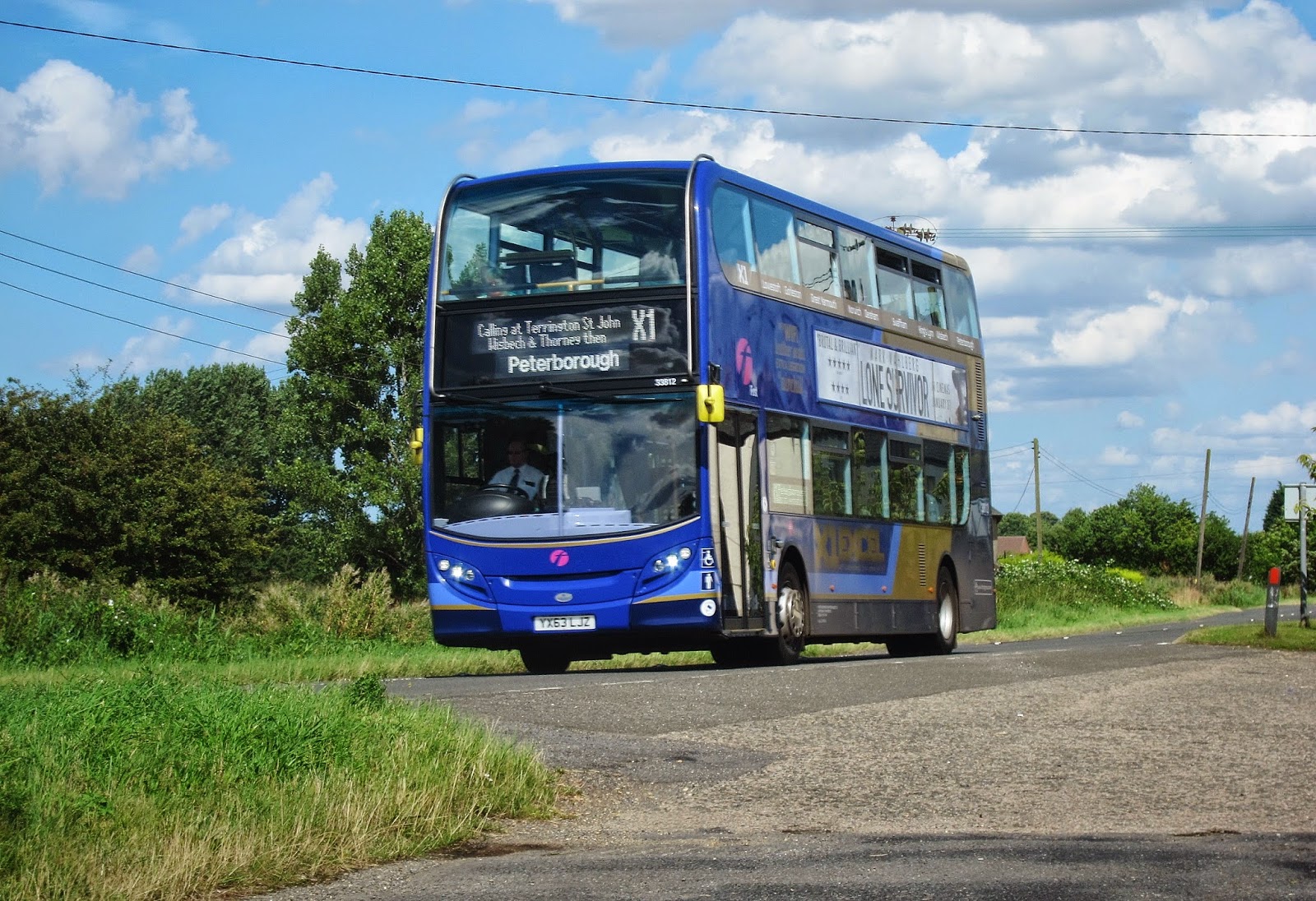 Following last week's incident with the Wisbech diversion, the X1 has been travelling from the Horsefair Bus Station down the A1101 Churchill Road turning right into Weasenham Lane before rejoining the normal route on Cromwell Road. John Knight reports that temporary bus stops have been installed in Weasenham Lane to cater for passengers who normally use the stop located between Oldfield Lane and the Weasenham Lane Junction. This is despite the fact that the normal route down Nene Quay has been open westbound as advertised. May be it is deemed a better option to use the alternative route in both directions.
33807 has been absent from the route since the beginning of the month after its gearbox became unserviceable following its failure near Narborough on 1st. After an investigation it was decided that it should be taken to Great Yarmouth where the facilities are more suited to heavy engineering. It arrived there earlier this week, but this has left King's Lynn with just a single spare vehicle which has fortunately been sufficient thus far.
Not a great deal else to report, the King's Lynn bypass has now reopened and buses are no longer travelling via South Lynn. King's Lynn garage are currently short of drivers and adverts for recruitment have appeared on the companies Twitter feed. The new timetable requires two additional car lines which are yet to be allocated drivers, but up to now a full service has been run with no cancellations I believe. 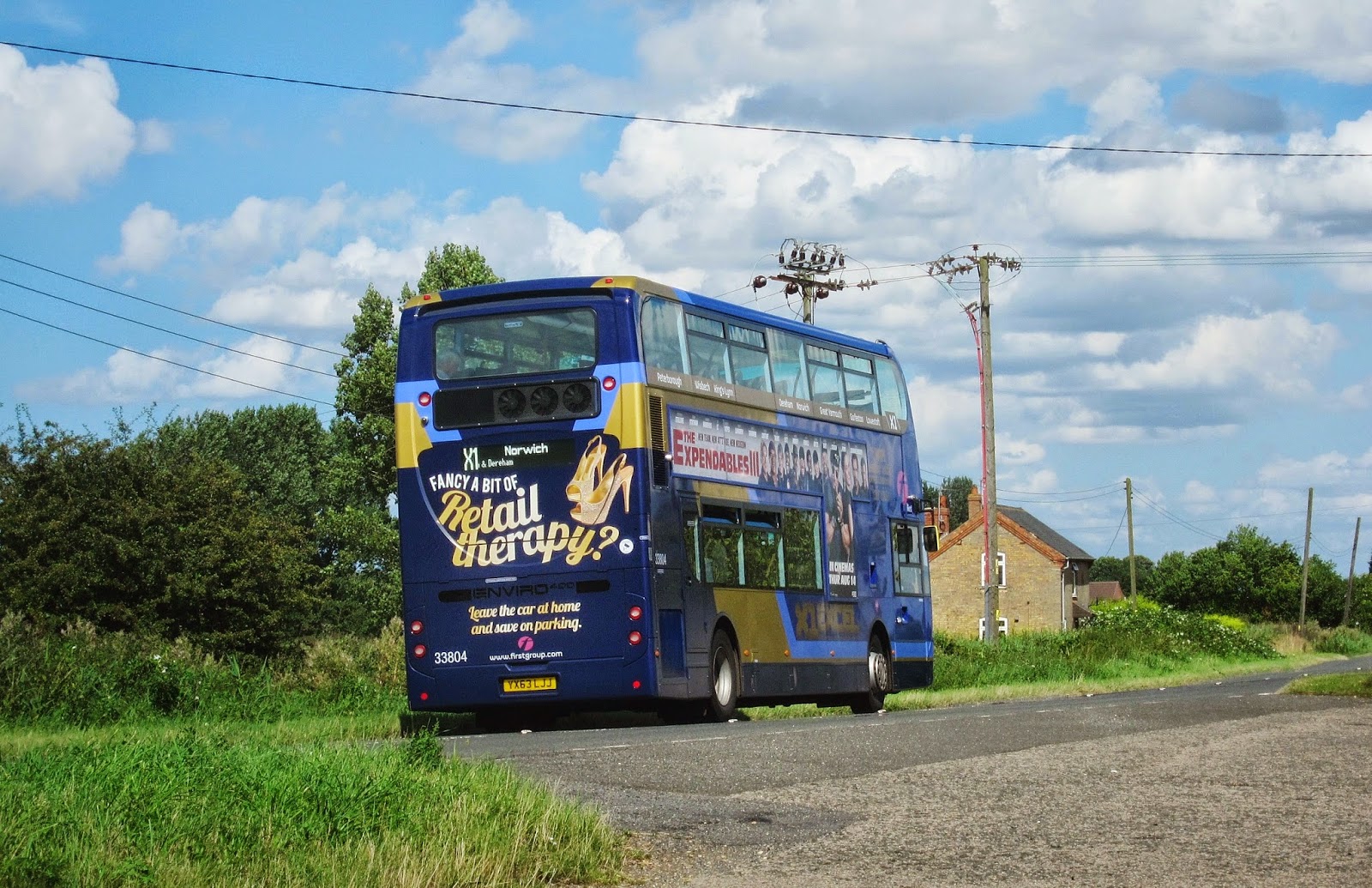 A driver I spoke to tonight says the Enviros do vary in their performance. As we have mentioned before, 33803 is definitely not a good one and is rather sluggish, while 33814 is just the opposite and is a favourite. The Yarmouth based Enviros have settled in now although 33821 had the indignity of suffering a puncture at the James Paget Hospital on 7th August see picture below 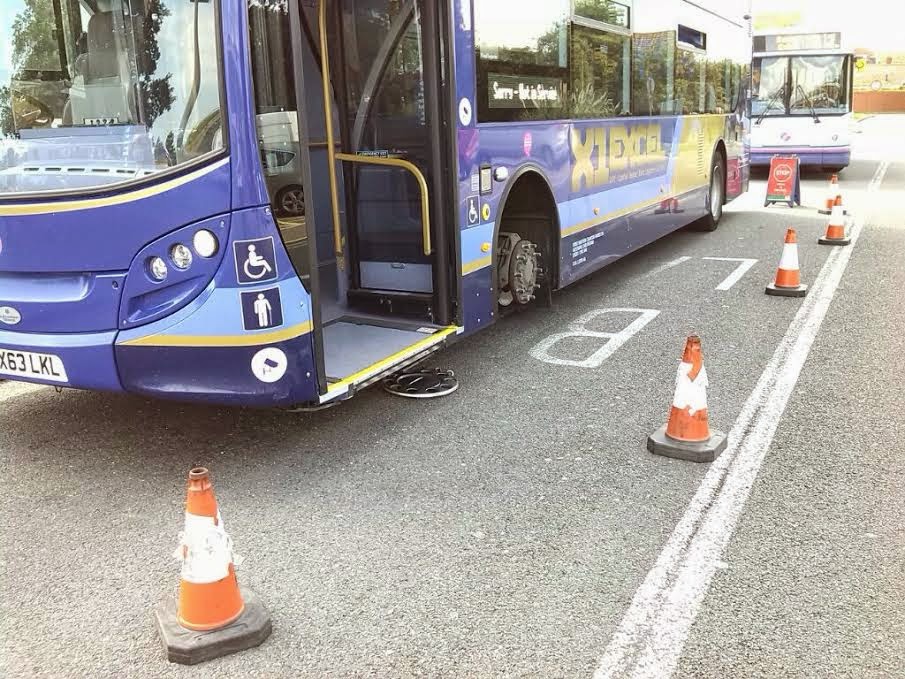 The next Enviro to reach the 100,00 miles mark is likely to be 33812 (current mileage 98284).
John Wilson writes to say that former X1 coack 20122 , still in use as a driver trainer, was noted in Vancouver Avenue recently. John originally thought his sighting was on a visit to the tip on the 6th but then adds "Sorry Gerard - I'm told I went to the dentist on Weds a.m. so it was a different day I went past Vancouver Avenue and saw 20122  there.  I get so much excitement these days with both a trip to the tip and dentist in the same week. Must make you look forward to retirement! Now if you were to say to me "was it Monday or Tuesday?", I would reply "yes" with a degree of certainty. Yours unspecifically, and with a promise not to write too often".
Always a pleasure to hear from you John, your sense of humour is certainly not on the wane.
This reminds me, thanks to all who have contacted me recently with info for the blog, all much appreciated.
Posted by Gerardtcc at 00:55 No comments:

The first week of the route split seems to have gone smoothly, though the roadworks which seem to dog the route have done their best to ruin things. The King's Lynn bypass work has over-run and I think is now due to end in a weeks time. Meanwhile, Nene Quay in Wisbech, for so long closed for flood defence work in recent years had been shut once again, meaning yet another diversion via Churchill Road and Weasenham Lane.
This time gas main relaying is to blame, but today Nene Quay was open for traffic in one direction and although publicity points to it being open for Peterborough bound traffic only, there was an element of confusion this morning when instead the eastbound side was open, with Peterborough bound buses being diverted.
The 10.44 departure tried the signed route via Market Place but was thwarted by the sharp right turn from Hill Street into Union Street as shown here :
Whoops ! The bus had to reverse all the way back up Hill Street to escape. One imagines the little lad in the photo asking his Dad if he can go for an exciting trip on the X1 soon !
At 11.45 today, the Quay was reopened to Peterborough bound traffic only with eastbound buses having to use Weasenham Lane, but not before three services (33816/12/10) had travelled through to Wisbech Town Bridge where they had to take the tight left hander to go over the bridge through to the Old Market. 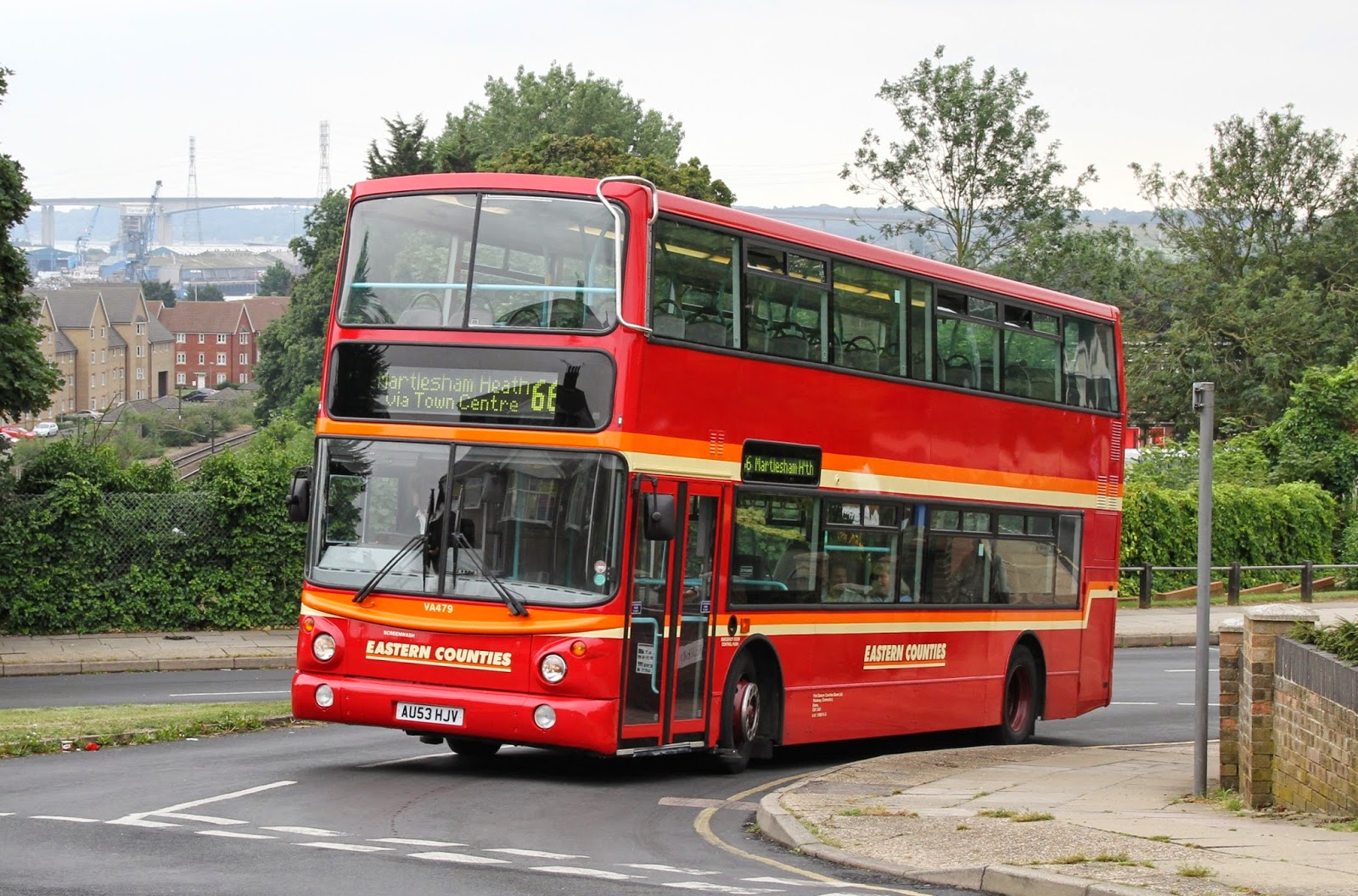 Whilst not with in the remit of this blog, but by way of a change Jim Long writes "I thought you might like to show 32479 as she was a Norwich car originally and now displays the Privatised livery of 1987.
This shot was taken on August 2nd and has the back drop of the Orwell bridge on the extended Superoute 66 service Martlesham to Halifax which is a local estate in Ipswich not West Yorks ..lol..Thought it would be nice on your site as the new team in place at First are making a real effort to spice things up so to speak"...... and indeed why not Jim ?
Posted by Gerardtcc at 20:21 No comments: