Not surprisingly with the scheduled replacement of the X1 Gemini fleet later this year, the rumour mill has been in full swing as to the destiny of the current fleet. The possible re-employment varies in location depending on which end of the route you hear it from ! The most feasible story so far can be found here :
http://www.norwichbuspage.com/2013/04/norwich-bus-page-exclusive-x1-buses.html

Now I am too old in the tooth to believe that everything here will definitely come to fruition and I will update you further when I have more information. Thanks to Kieran for the link.

37563. The doyen of the fleet has been active most of the week, but did have a couple of days off for servicing and attention to an adblue sensor problem.
37565. This bus has now worked for 22 consecutive days which is quite good for nowadays.
37569. After a period of light use,  this bus is scheduled to go to Volvo for an axle modification this week.
37570. Following the removal of the rear vinyl, this bus has been devoid of rear adverts, but it has now had a frame refitted and is identical to the other B9s.

Route News :
An accident at Narborough caused diversions for a time on Saturday, Malcolm saw XL15-L9 with 37569 arriving back in Lowestoft at 16.10 and heading back west 'not in service' at 16.20, it is due to depart at 15.55. Meanwhile, roadworks on routes into Peterborough have caused delays at peak times.

The arrival of the new vehicles for the X1 has been unavoidably delayed I am sorry to report. New buses should begin to appear in late August/early September. The reasons for the delay are that stringent efforts are being made by 'First' to ensure that the new vehicles are suitable for the long distance route. Points of contention have been the quality/depth of the seats, the weight to speed ratio to guarantee running at 58mph and the internal lighting / layout arrangements. These were all finalised too late for the May/June build slots, but at least we know we will get something suitable when the buses begin to appear.
Vehicle news :
37571 : a fuel fault caused this bus to be out of action between 1st and 10th of April, but it is now back in service.
37577 : this one was taken off duty last Sunday (7th) and replaced by 37158, it then was unavailable early on Monday meaning that coach 20515 deputised on Y13 to Peterborough and back before 37577 was OK again.
37158 disgraced itself on Thursday when it failed at Thorney on K18/XL05 at around 15.10. 37576 worked the turn at 17.02 from Lynn to Lowestoft and 37158 had a pulley and belt replaced before it could be driven back to King's Lynn for further examination.
37160 expired on Friday with a data link fault and 37156 came out instead.

The appearance of 36180 on Friday 5th was an emergency substitution and 37572 was available again later to replace it.
Posted by Gerardtcc at 21:45 No comments:

Yes it is two weeks since my last blog entry and I apologise to regular readers for the delay in updating, due to the reasons I have given previously.
Knowing that we occasionally feature blasts from the past, my friend of many years, Richard Adderson wrote to me enclosing a couple of pictures of a forerunner to the X94 and X1, the 794 service. Here the Sunday 11.15 Norwich to Peterborough is seen before departure from Surrey Street on February 27th 1983 with old faithful Alexander T type Leyland Leopard MCL934P, which was new in 1976. 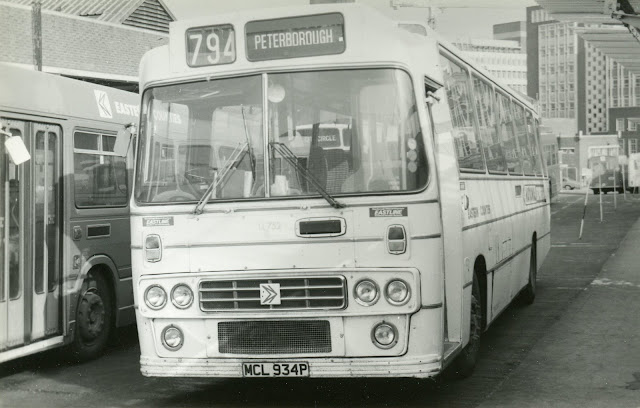 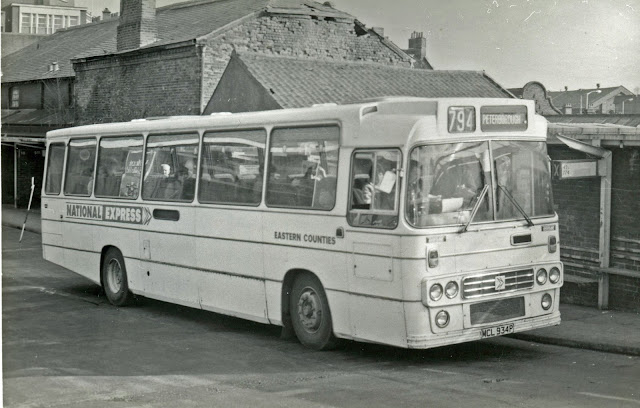 To more recent times now and coaches 20514 & 20515 are regulars on the shuttles, but in times of shortage they can get used on the longer Peterborough runs.

Thanks to everyone for keeping me informed of events during this period where I have been otherwise engaged, especially to Bruce. Des and Malcolm and to all those who have sent me pictures to brighten up the blog. The Geminis have done reasonably well over the last fortnight, but squeezing the scheduled safety services into the Easter period is always a bit of a challenge for the engineering staff. Good Friday ended up being a bit of a nightmare for the timetable with many services running 20+ late. Bruce noted 37577 leaving King's Lynn on the 12.50 to Peterborough near the Ouse bridge at 13.26 and it came back through Walpole at 15.37, 27 late. Malcolm reports K5 and K6 not arriving in Lowestoft due to a six vehicle accident in Great Yarmouth .
Over the Easter weekend, 37564 returned from Volvo at Norwich after rear axle repairs and it returned to traffic on Tuesday (2nd). 37567 is believed to have been the bus which was unavailable on Tuesday for 20514 to work (see above) and overall Tuesday was a bad day, as in the evening 37156 was failed at Peterborough before working L10-XL16 21.10 back to King's Lynn with an air fault. This resulted in it having to be towed back to Lynn. On Wednesday night L12 20.50 King's Lynn - Peterborough was noted departing 25 late with 37569, reasons unknown while in Lowestoft, Matthew saw 20514 heading out of the town on the 17.25 X1 short to Yarmouth and also on Wednesday, Peter says "Full marks to my lady driver tonight on the 16.05 ex Peterborough for telling an inconsiderate man to turn his music off which would have meant a hellish journey for the rest of us"
On Thursday evening, 37572 was failed at Yarmouth on arrival and despite attempts to repair it, firstly to work today's Y6-XL12 and then a second attempt on Y13-XL19, it only reached Lowestoft on the latter before expiring. 36180 was hastily summoned from its city work in Norwich and worked Y13 forward 20 late.  Punctuality monitored by Bruce this afternoon was poor. K14-XL01 came back from Peterborough about 75 late with 37564, K15-XL02 and 37568 followed it 43 late and then next seen was K17-XL04 with 37573 just 2 late, More details in the next update, but in the meantime some pictures for you....