A new timetable will come into force on January 25th which includes provision for the X1 to call at all stops between Dereham and Wendling as well as allowing extra time over certain sections during the morning and evening rush hours. You can find the revised timetables here :

I have been taken to task by some readers for failing to mention the ongoing work at King's Lynn bus station. This will result in the X1 being diverted away from the bus station to temporary stops in Portland Street between March 9th and mid June. Here is another link, this time with the new timetable in PDF form as well as further details on route changes east of Norwich :
http://www.firstgroup.com/ukbus/suffolk_norfolk/travel_news/news_initiatives/?item=24701&conf=0

On the traffic side, 33815 returned to service from repairs on Thursday 15th January, 33808 is also back at King's Lynn now while after a failure at Dereham on 14th, 33817 has gone to Yarmouth for attention, it is also due to go to Full Circle at some point to have its crease on the back corner removed. A three car pile up  at West Bilney resulted in some delays on the morning of 20th but only the 07.20 Norwich - Peterborough was badly behind time and most of this was soon regained. The next report will look at recent happenings in the East.

Posted by Gerardtcc at 23:27 No comments:

A major engineering operation to reinstate the double track junction at Haughley has resulted in an intensive rail replacement service operating over a number of weekends. Rail services affected are those between Stowmarket and Diss / Bury St. Edmunds.
Norwich and Cambridge/Ely to Ipswich services have been replaced by buses. On Sunday 4th, X1 Enviro 33805 was spare at Ely as required and yesterday (11th) 33812 did likewise. At the other end of the route Lowestoft Geminis 37569/70/71 along with tacho fitted 36180 from Norwich were drafted in on Saturday to help on the Norwich - Ipswich axis. This left a shortage of vehicles for the X2 and Michael Bryant noted Norwich Gemini 36175 on the 13.30 Norwich - Lowestoft on Friday, while  on Saturday Malcolm Hicks saw 36170 on the 11.00 Lowestoft - Norwich and 36175 on the 15.00 departure.
On the X1, the western section has run well for most of the week. Late services noted were on Monday, 33818 which although on time going west came back on the 15.15 from Peterborough running 18 late. Tuesday went well but on Wednesday there were westbound delays through Wisbech mid-morning, 33803 on the 10.05 from King's Lynn went by 20 late and the next service with 33813 was 26 late, however, some smart driving saw this return only 12 late on the 12.05 from Peterborough. Repairs to a manhole cover near Swaffham meant services were diverted via Holme Hale eastbound and Sporle westbound on Friday. Delays were fairly minimal and worst affected were the 07.20 from Norwich (33805) which left Wisbech 15 late and the 11.00 from Norwich which was 12 late with 33813. There were evening diversions for the last two westbound services from Wednesday to  Friday because of major roadworks on the A47. Services took a diversion via Whittlesea and did not serve Thorney or Guyhirn. 33808/815 remained off the road for repairs this week and 33808 is at Great Yarmouth receiving attention. 33818 is still helping out at King's Lynn as a result.
Over at Lowestoft there has been some variety and 66126 appeared on the 10.10 to Martham, while newly arrived Volvo Renown 62143 was at work on the 99, both on Saturday.
Posted by Gerardtcc at 15:11 No comments:

Firstly a very Happy New Year to all my readers. I know updates have not been frequent over the last 12 months and several people have asked whether I intend to continue running the X1 Blog. The answer is that I will give up when I get bored and that hasn't happened yet, so for the time being it's a case of Carry On Blogging.
Thanks to all of you who supplied me with photographs and information in 2014, it is much appreciated and helps make the blog more than just my own thoughts and observations.
The big question is, will the blog have more to report in 2015. The answer to that will probably have more to do with vehicle reliability than anything else. Since the timetable split in July last, 33818 - 33824 have only operated over the Norwich to Lowestoft section of the route and apart from a brief re-appearance by 33824 to have an MOT at King's Lynn, this has been the situation. On Friday 2nd January however, 33818 arrived at King's Lynn to assist after a couple of incidents.
Firstly on Monday 29th, 33808 failed at Easton while working the 13.30 Norwich - Peterborough with a gearbox problem. The bus was disabled to the extent that it had to be towed back to King's Lynn where it arrived at 18.30 for investigative work to begin. The gearbox drive plates were the problem and it is hoped to have 33808 back on the road in the next few days. Meanwhile 33815 has been taken off the road with a serious engine fault and ADL staff will attend to decide on remedial action this week. It is thought that this may mean a new engine is required and the bus may be out of traffic for quite a while. It was therefore decided to bring in 33818 as a temporary replacement. On Saturday 3rd 33818 returned to the Peterborough route work commencing with the 06.34 King's Lynn - Peterborough.
As at close of play on Christmas Eve, 33811 was leading in the mileage stakes having clocked up 138,578 miles and seven others of King's Lynn's Enviro allocation had also exceeded 130,000. Laggard 33803 had done 117,944 miles at this time.
As you may know First have revamped their fares from January 4th and I'm pleased to report a wider choice of options for those who use the western part of the route. Special mention must be made of a new weekly  X1 west of Dereham ticket - this brings the cost down from £26 to £22 for the week and is incredibly good value for money in my opinion. More info on the revised ticketing arrangements can be found here :
http://www.firstgroup.com/ukbus/suffolk_norfolk/travel_news/news_initiatives/?item=24141&conf=0 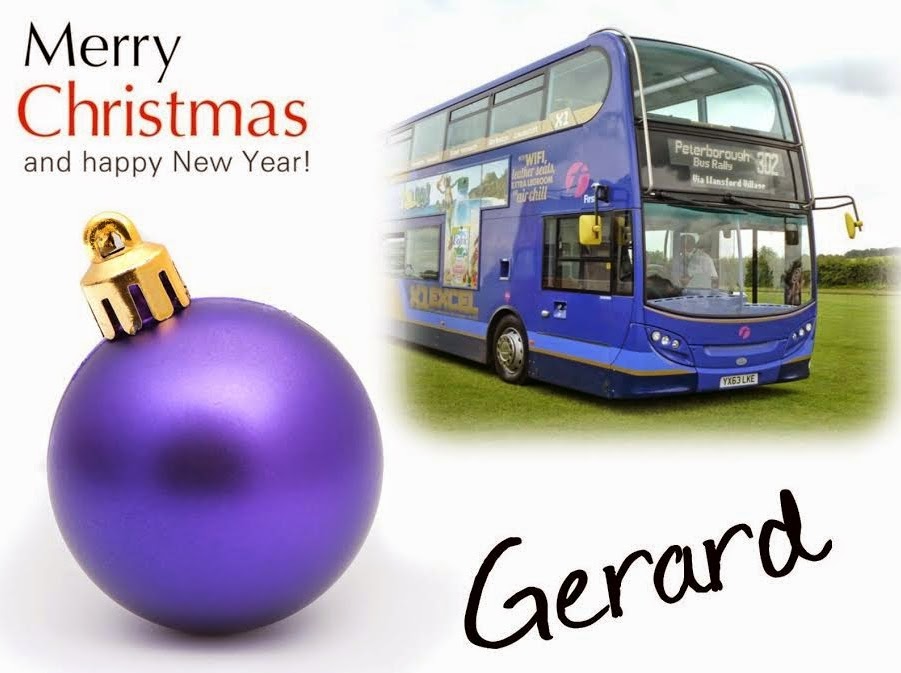 Posted by Gerardtcc at 23:11 No comments: