When is an X1 NOT an X1 ? Well the answer to this strange question is "when it's a Bernard Matthews Contract".
First have long been responsible for the running of BM contracts east of Norwich, but although often rumoured in recent years, King's Lynn have not been involved - until now that is.
In the early hours of tomorrow (Saturday 29th) a big blue Enviro 400 will creep out of King's Lynn garage - even before the X1 fleet are being prepared for another hectic day. The bus will then go light to Fakenham to do its BM deeds before returning to Lynn in time to be X1 reserve for the day.
The contract is only for the Christmas period I believe and I will bring you more details as I receive them.

Posted by Gerardtcc at 23:32 No comments:

With such little of note happening at the western end of the route, I thought it opportune to take a look at daytime operations at Lowestoft, thanks largely to Malcolm's observations over the past few weeks. The X1 here continues to be worked by the 7 Enviro 400s transferred from King's Lynn at the July timetable split. These are supplemented by the Geminis which previously worked the full route prior to September 2013 and the unique Enviro 33423.
A look at recent weeks shows all the Enviros appearing regularly and for those who are so inclined to seek it out, 33423 seems to have its own regular diagram which involves the 10.05 Great Yarmouth - Norwich having been noted working this turn on six out of ten days recently.
The X2 seems to be going through a remarkable period of stability with almost 100% Gemini operation. ALX400s do appear occasionally though with 30889 being seen on 4th, 6th, 14th & 17th November and sisters 30886 on 19th, 30900 on 18th and 30901 on 10th, No single deckers were noted on daytime services in this period.
The Martham services 1 and 1a which partly duplicate the X1 route are a little more interesting, the majority find themselves with 320xx or 322xx series double deckers of the Volvo B7 type with Alexander or Plaxton President bodies. The ex Leicester 326XX series with Wright Eclipse bodywork also appear on occasions. That said, the 10.10 Lowestoft - Martham had 37574 on 10th and 37575 on 14th, while the 10.40 1a was more varied with exceptions to 32xxx series being 37577 on 5th November and 34109 on both Saturdays 8th & 15th. The 11.10 service 1 had the comparitively rare sight of a single decker on 15th when 60813 turned up. The 14.40 service 1a had the most unusual bus though when Enviro 33821 found itself working the turn on the 13th, on 18th this service had 37576. The 15.10 service 1 seems to be favourite to get a Volvo single decker though with 60813 on 4th, 60622 on 12th and 60814 on 17th. The only mishap reported was on 18th when 33819 arrived in Lowestoft on the 09.25 X1 from Yarmouth but was unable to continue and the return service at 10.20 was cancelled.
At the western end of the X1 route, things have been quiet, although this last week there were some early morning delays caused by temporary traffic lights near Guyhirn. Thursday was the worst day with some services taking the Wisbech St. Mary alternative route. Going eastbound, XL03 08.05 from Peterborough arrived in Wisbech 22 late with 33813 and this duty was still running 6 late when it once again went eastbound on the 14.45 ex Peterborough. XL04 08.35 from Peterborough with 33806 was 21 late into Wisbech at 09.41 and the 09.05 came in 18 late with 33807. The delays then evaporated though and services resumed running to timetable. On Saturday 22nd services ran well and only one late bus was seen, the 13.05 from Peterborough was 15 late into Wisbech with 33811.

Posted by Gerardtcc at 20:49 No comments:

21st October was the anniversary of the entry into service of 33824, the last of the X1 fleet, so these figures pretty much indicate the first years mileage. 33818 went into traffic on 7/10/13 hence its slightly higher mileage. Both 33819/22 spent sometime out of traffic for collision and engine repairs and yet both have almost touched 100,000 over the year. I wonder if there are any other UK bus (not coach) fleets which clock up huge figures like these ? Do let me know if you have any ideas.

It is extremely rare for any of the Enviros to spend more than three days in the garage, to illustrate this here are the occasions when that last happened with number of days off the road in parenthesis and the date of return to traffic / reasons where known.

Pretty impressive by all accounts and the unblemished records for 33808 and 33811 are reflected in them being among the highest in the mileage stakes.
Speaking to a driver last night, he agreed that things were really quiet and that failures are almost unheard of. The most unusual thing that had happened to him was when a passenger arrived in King's Lynn at midnight wanting to get to Cambridge. Seemingly stranded, said driver then kindly offered to drive her to Cambridge himself, an offer she was pleased to accept. Nice to have a Good Samaritan story. 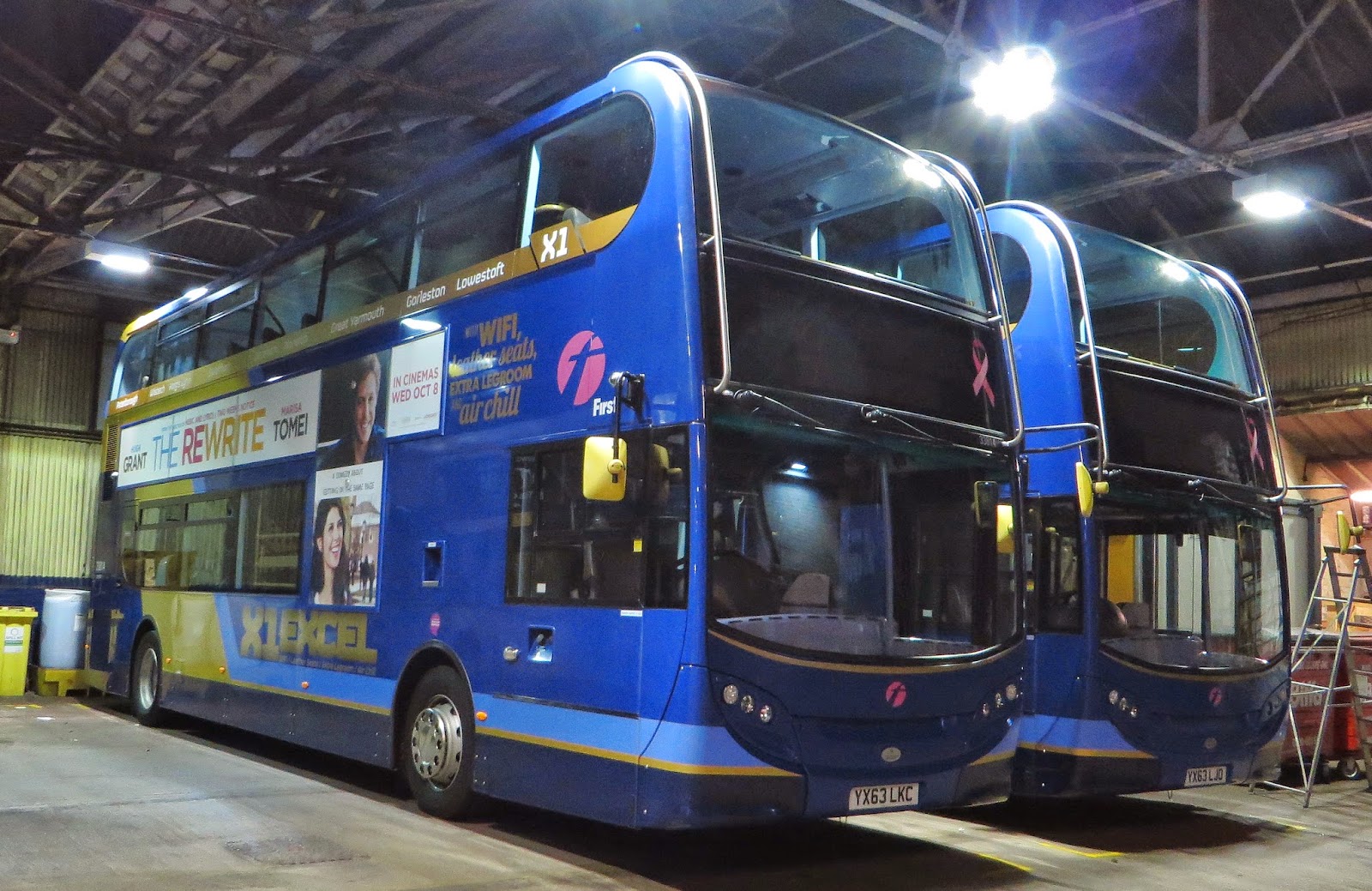 First of all it was pink ribbons (above)  and now our X1 fleet are adorned with poppy symbols to commemorate Armistice Day. Both campaigns strike a chord with the public and 'First' are to be congratulated for recognising the importance of both occasions. 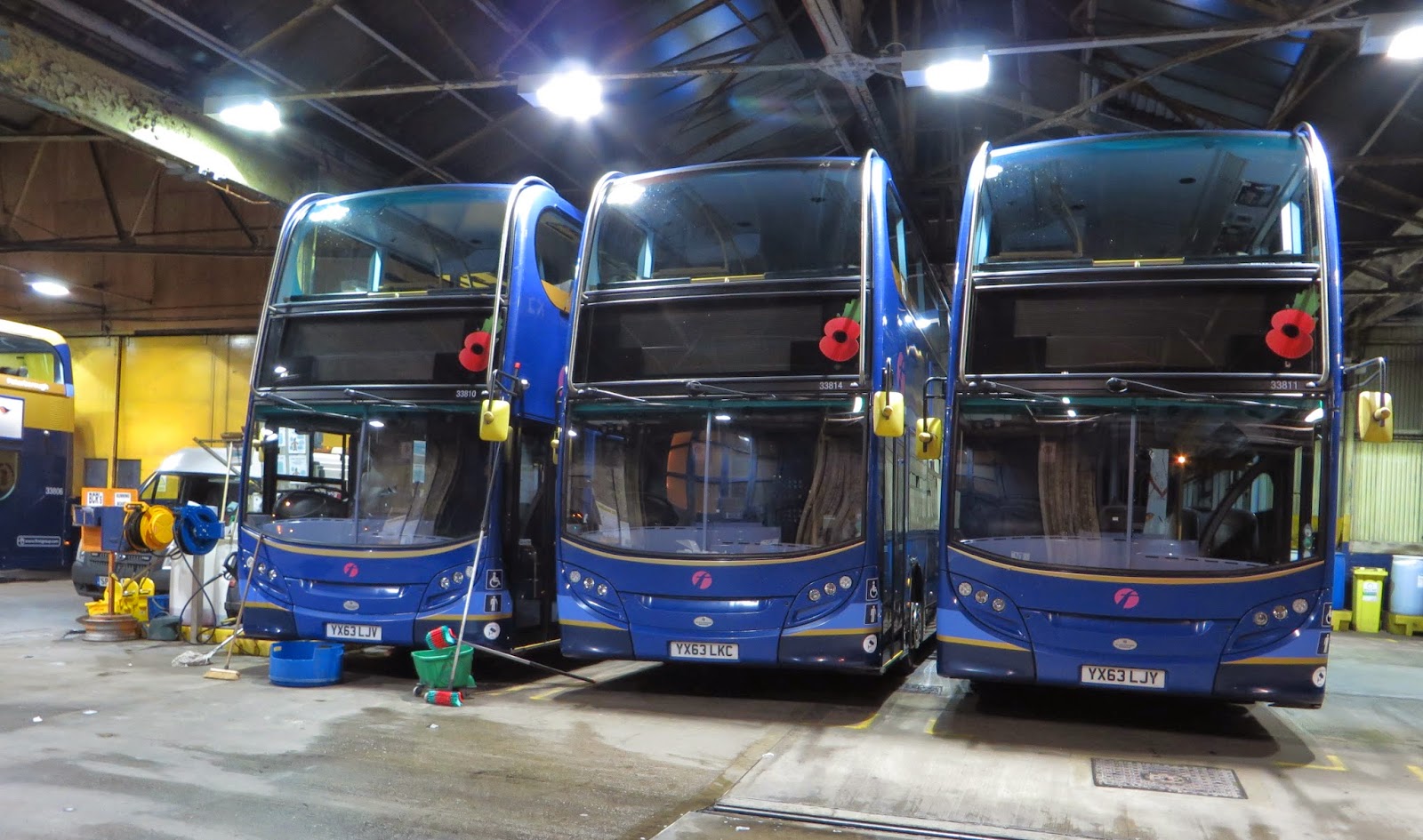 Now I have to admit that just as I was about to post this update, I thought I'd better check out the other local bus blogs to see if I'd missed anything X1 related in recent weeks. Turns out I hadn't but do have a look at these blogs yourself if you've not already done so. Links are at the bottom of this blog. Between them they provide comprehensive coverage of the local scene with other operators as well as First. Congrats to Andy, Roy, Steve and Cameron in particular for keeping up the good work in this respect.

Posted by Gerardtcc at 15:19 No comments: