Apologies for the long delay in updating the blog. I am currently having my house rewired re-plastered and redecorated throughout, so time has been limited. Fortunately friends have come to my aid with some newsworthy items.

Peter writes "How's the X1 going from the new Portland Street stop in King's Lynn ?"  This of course refers to the temporary stop here while the bus station is partly closed for reconstruction work. The answer appears to be ok , here's a snap from Andy Gibbs of 33817 at the temporary stop on 11th  March :

Roy Northcott from the excellent East Norfolk Bus Blog ( http://eastnorfolkbus.blogspot.co.uk/ )
has sent me a picture taken by driver Roger Bellward of a very unusual sight on the X1 taken on 12th March. An A47 closure between Acle and Norwich for three nights from 11th to 13th resulted in the diversionary route via South Walsham being employed and the consequent use of single deck buses. Some of Lowestoft's Jersey Darts were used as was Streetlight 47504 seen below :

Kieran Smith writes "I thought you may wish to point your readers over to my blog www.norwichbusesblog.blogspot.com for a bit of nostalgia (after reading yours of course!). I've recently put together a rather large archive of previous timetables dating as far back as the 1930s. Among these include the following for any X1 fanatic:
-X94/X95 (2003) and a massive amount of the other Excel services, also the Eastern Counties 34 from 1936, clearly a predecessor of the X1. Interestingly, it took 2hrs and 20mins from Lynn, a connection for a 7  for Great Yarmouth is shown too; the full timetable is also available. Meanwhile, the 2008 Full X1 timetables - featuring the old 'X1 Shorts' and a couple of short runs from Dereham are also online.
These can be found by clicking "Historical Timetables and Route Maps", just below the header. From here it is pretty self explanatory!"
A very interesting site it is too I may say.  Roy sent me another email last week, he says "Thought I would get out during the eclipse to see if I could get a pic of an eclipse during the eclipse!
I got one of a saloon version initially at the roundabout outside Gorleston Parish Church and whilst waiting an E400 passed by at 9:18 on the X1 to Lowestoft :
After waiting some time I gave up and was heading home when eclipse 37573 shot past me on the delayed 09:08 from the JPH. I managed to quickly get a going away shot at 09:30 as the clock on Gorleston Parish Church shows
Gordon Bruce was among hoards of enthusiasts at the Norwich Bus Running Day last weekend, unfortunately I was unable to attend as I was filming for my music convention in a couple of weeks time. GB says " Don't know if AU53 HJF ever worked the X1 or its predecessor, but here it is at County Hall on today's Norwich Classic Bus Running Day making out that it did!"
Thanks guys for all that info, made putting the blog together a lot easier I can tell  you ! At the western end of the X1 route, the Enviro 400s continue to visit Cummins at Wellingborough for attention. 33803/4/13 have now been dealt with and 33805 is there presently. 33806 is currently undergoing its MOT. On 16th 33807 failed at Necton at 19.30 but repairs to a pipe saw the vehicle able to continue to Norwich. Two days earlier a puncture on 33816 saw it replaced by 33808 at Wisbech before departure as the 10.14 to Peterborough.
Timekeeping by and large has been excellent. I will try and bring you another report including sightings from Lowestoft in the next week  or so.
Posted by Gerardtcc at 19:04 No comments:

Thanks to all those of you who have encouraged me to continue with this blog. Charlie says "Don't be put off by those who want to gag you - reporting the facts has always been the mainstay of your blog " and Steve L  writes " Come on Gerard, carry on doing what you enjoy doing  - giving us a good blog to read". Well thanks guys and I will do my best, juggling a full time job with all my other commitments can be a bit of a trial at times, but hopefully reports will be more frequent in future.

So it is almost a month since we had the last proper update, a look at the other local blogs has seen the X1 get a few mentions. Cameron reports 33821 in operation with an incomplete rear ad since a window breakage in February and 37576 has been away for a while receiving repairs at Full Circle for minor collision damage. It is back at Yarmouth now. Early February saw some substitutions on the eastern section of the X1 due to a vehicle shortage. On Sunday 8th 32058 and 32629 were employed on the route, the latter seen arriving at Lowestoft on the 09.10 ex Norwich. Next day 32629 was deputising again on diagram 7045 and was viewed on the 10.20 Lowestoft - Norwich. On 23rd February it was 32629 again this time on the 15.30 from Lowestoft (turn 7050). Otherwise despite the continued absence of 33818 on loan to King's Lynn, the service has managed quite well. Roy & Grahame report a very unusual working on 20th February when 37578 suffered a bird strike and 43864 was used instead on the 08.05 Yarmouth - Lowestoft.


Over in the west, there has been a slight improvement in the performance of the Enviro 400s. 33811 as reported last time was in trouble and taken to Cummins at Wellingborough for modifications and is now back in traffic. A programme of remedial work is taking place on the other Enviros with 33812 the first to be treated and this is now back and 33804 has gone away in its place. The work is expected to take about a week on each vehicle. I won't enlarge on the detail here for reasons stated previously.
33805 has been operating recently without passenger side advertising giving a area chance to see what these buses should look like ! MOT's have restarted and 33803/4 have now been dealt with. 33810 has had a new air con pump. 33809 failed at Swaffham westbound , mid afternoon Monday 23rd February with an entrance door fault and was replaced by 33803. No other failures have been reported though.
Changing of vehicles on the western section is fairly infrequent, although turn 6 is the one which tends to see a maintenance swap as required. The services are as follows

The maintenance swap tends to occur at King's Lynn at 10.56 with the fresh bus going forward at 11.01.
Des Speed brings us news of another ex X1 regular, 37562 which is now based in Norwich, Des was driving her on 25th February and took this picture of her at the University Terminus : 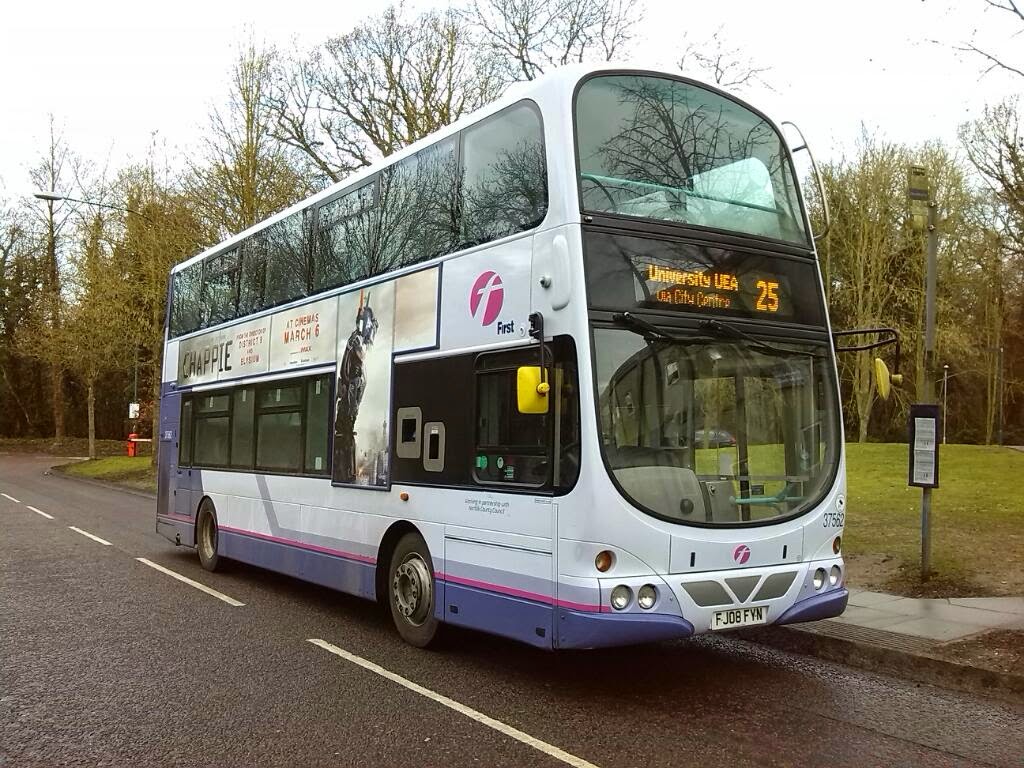