With Norwich City emerging victorious in the Championship play off final at Wembley on Monday, NCFC fans like myself can look forward to a return to Premier League action in August. I have to confess to not being a fan of the play-off format, probably mainly because of memories of the trip I made to Cardiff several years back when Birmingham City beat the Canaries - a result that pleased at least one X1 driver I know, but deflated me.
For the Cardiff game, the almost brand new Paragon coaches took a share in transporting fans to the match, whereas in 2015 a handful of ex X1 Geminis plus X1 Enviros 33803/4/19-24 were among somewhere in excess of 120 vehicles used to take fans to Wembley. Here then are a few pictures sent in by blog readers. 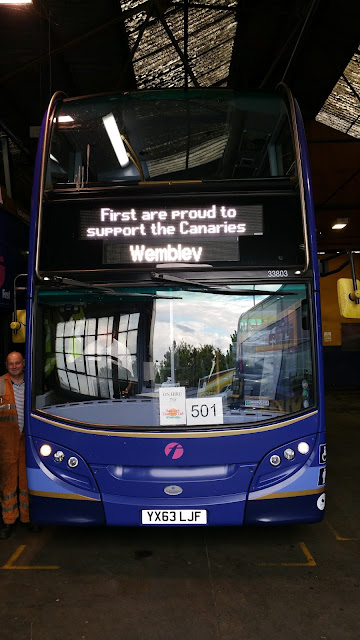 33803 gets a proud moment as she is prepared at King's Lynn for the Wembley trip. Photo : Wayne Sheppard 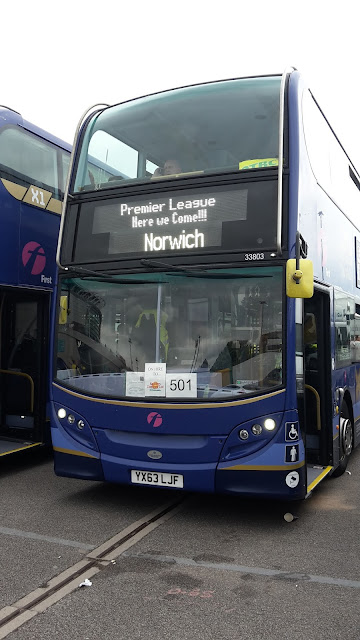 33803 again with another variation on the blinds, this time photographed by blog reader Brian Coombes 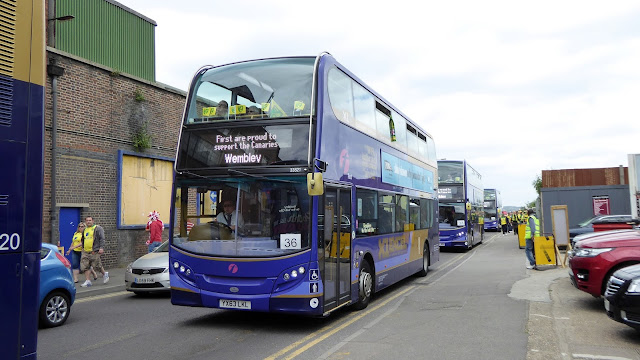 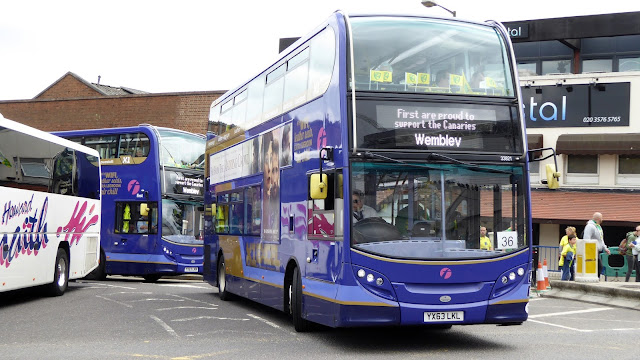 Another one from Zak with 33821 and friend at Wembley. 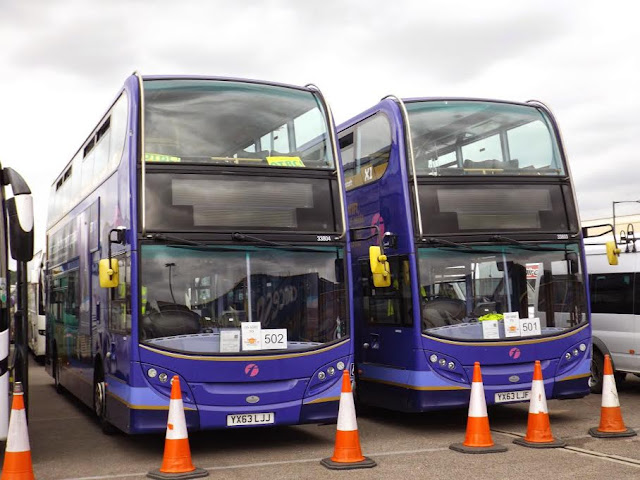 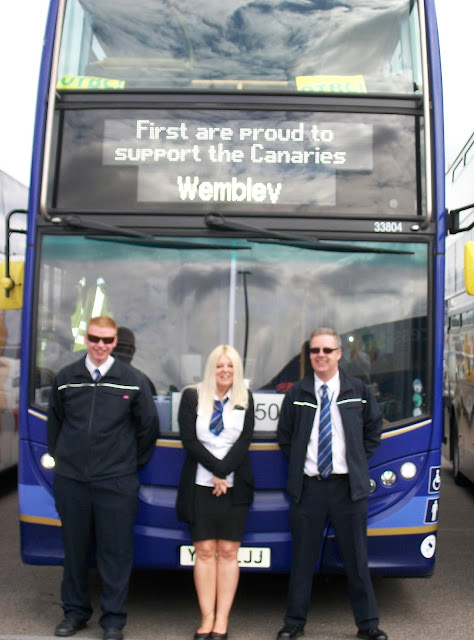 Thanks to all who supplied pictures of the momentous occasion, next blog update when I can manage it.
Posted by Gerardtcc at 18:22 No comments:

The work on my house is continuing, so still chaos at home. Thought we ought to have a few pictures though, just to remind you all what the Enviros look like !

Looking back through my 'inbox' I found a few things that I'd failed to include so here goes :
Being such a lengthy route, albeit now cut into smaller sections, the number of diversionary routes used by the X1 at times of roadworks and traffic incidents are many and varied. One of my correspondents reports two such incidents on the same day, Firstly on April 22nd, at about 1300 for a few hours, outbound from Norwich (to Peterborough) there was a closure of the A47 between the A11 & B1108 junctions. Buses were diverted after the Newmarket Road stop, via the Ring Road and B1108. Later that evening a totally unadvertised closure of the A47 at Thorney for roadworks had the 2020 & 21.40 services from Peterborough caught at Thorney, then having to use the B1040 road to Whittlesey before continuing on via Goosetree and Rings End to join the A47 at Guyhirn.

About a year or so ago we reported the use by Emblings of Guyhirn of ex Eastern Counties X94 / X1 coach R841DVF (20141) on the Wisbech to March service, well since then two more old X1 faithfuls have returned to the area, firstly Lynx of King's Lynn have acquired P330RVG (20120) :

Then, this week I spotted (at a distance) a rather smart B10M in buff livery on what appeared to be a schools contract to the Thomas Clarkson Academy in Wisbech, I took a distant photograph of it and was amazed to find it was N617APU (20117) now under the auspices of Fowler's of  Holbeach Drove :
This all goes to prove, you can't keep a good bus (or in this case coach) down. I've always had a soft spot for 20120 incidentally, for while being a bit unreliable when with 'First', it was the coach on my first ever X1 journey with Karen F at the wheel many years ago, It also happens to be the subject of the second ever photo on this blog back in July 2008 !

More news on events at the Lowestoft end next time plus an Enviro update.

Posted by Gerardtcc at 00:09 No comments:

At last had a few minutes to bring you some X1 news. My house refurbishment continues,hence the long delay between bulletins.
Vehicle wise 33816 is now back at King's Lynn following a lengthy lay off to receive engine attention, however, before it can return to traffic it requires an MOT and this is being sorted at the moment. 33808 had now gone to Wellingborough to have the flex plates modification.The loan of 37562 mentioned last time lasted less than a week although 33818 is still on long term loan from Lowestoft. An old King's Lynn bus, 30889 now allocated to Lowestoft has been present for nearly a fortnight at Vancouver Avenue for a major service.
On the road there has been the usual crop of incidents caused by congestion and rtas on the A47. I will do another update with pictures and reports in the next few days.
Posted by Gerardtcc at 23:54 No comments: