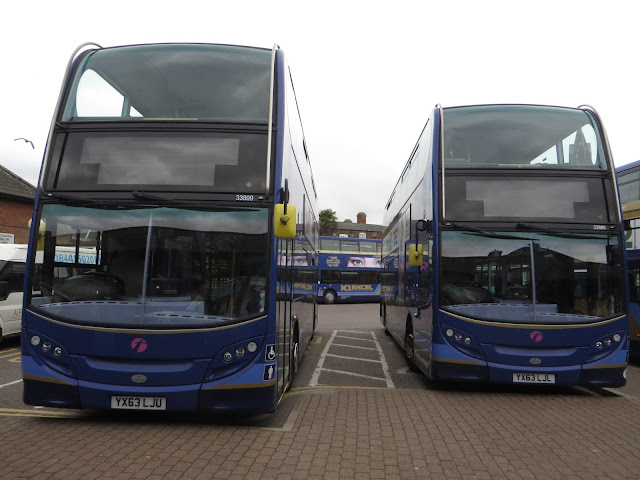 So far it has been an eventful week. Yesterday (Monday) a fatal accident between Thorney bypass and Guyhirn called for full closure of the A47 at this point between 06.30 & 15.00 and early morning services were forced to divert via Whittlesey.
The first return service from Peterborough was seen at Walsoken running 44 minutes late with 33814 and not far behind was K2 seen leaving Wisbech bus station 21 late with 33803. 33806 came past me on K3 running 31 late and while I didn't see K4, K5 which is due past me at Wisbech at 09.50 turned up at 11.19, 89 minutes late. Clearly at this point a decision had to be made. The alternative route was completely congested and a number of buses were stranded in the affected area. As a consequence it was decided to terminate westbound services at Wisbech where they laid over until their due departure eastbound. This situation prevailed until the 15.24 departure (K6) which was the first bus able to continue onwards to Peterborough.
During the day buses stabled in Wisbech bus station resulting in some unusual photo opportunities as seen below

Tuesday was relatively incident free, but the 06.45 King's Lynn - Norwich failed at Dereham and later the 12.54 Wisbech - Peterborough failed to run. Its vehicle 33805 left Wisbech at 13.52 westbound ' not in service' presumably running empty to Thorney before taking up the return working.
Posted by Gerardtcc at 22:21 No comments:

The long process of transforming my house continues, so another brief update on a few things. Enviro 33808 remains out of service at Full Circle for body repairs, although it is expected back at King's Lynn this week. Last week 33811 required its MOT so Lowestoft loaned 33824 to King's Lynn for a few days. I travelled back from Peterborough on it on Thursday evening and this has to be the most uncomfortable trip on an Enviro I've had. The rattling internally was annoying and the engine was making a high pitched whistle, as well as the suspension seeming worn out. On a minor note the upstairs information screens on both buses I travelled on were out of order and the wi-fi was very hit and miss. Bit of a disappointment really. Nevertheless both trips were on time which was a credit to the drivers,
It looks as if consideration is being given to recasting the evening X1 timetable on the western section. The likelihood is that services from King's Lynn to Peterborough and Norwich will revert to an hourly interval pattern with the final journeys of the day being withdrawn. Loadings are poor on these late services and it also means two very late arrivals at King's Lynn at just before 01.00.

Posted by Gerardtcc at 23:30 No comments: