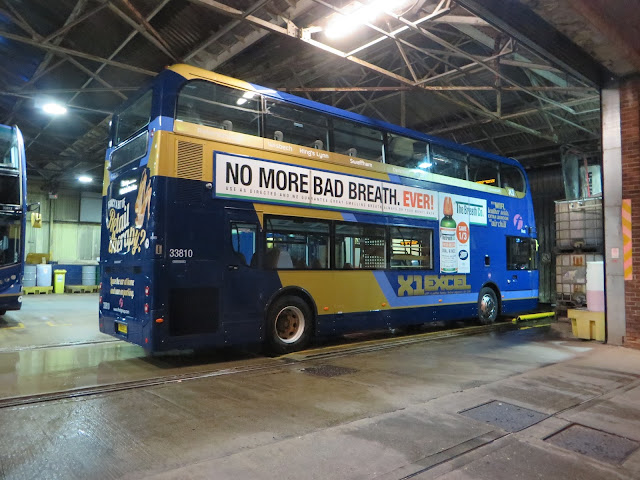 'Time flies by when  you are the driver of a train' - that's how the song went and some of you will know where it is from ! Probably the same when driving a bus, certainly when you are a blogger.
Over a month since the last report and my house is approaching completion, so may be more frequent updates before long.
Nothing groundbreaking to report, in fact the pending arrival in Lowestoft of 30888 in Lowestoft Corporation colours would be much more noteworthy. Gemini 37579 is a transfer from Yarmouth to Lowestoft and reports that 34108 (former X1 standby) and 34114 were to be retired at the beginning of September appear to have been premature as both have been seen in service since. When this does happen, 34111 will be the only remaining Royale at Yarmouth in use. Keep up to date with developments at
http://eastnorfolkbus.blogspot.co.uk/

32203 was at King's Lynn last Wednesday but  not for X1 standby, instead it was en route to Rotherham for refurbishment.

Now where were we ? I suppose we ought to start with a fleet update on the Enviro 400s. 33807 is back from bodywork repairs and 33816 also visited Full Circle for roof repairs in the period under review after low tree branches caused some damage. As I write all the fleet are to my knowledge available for service. 33807 has yet to have its full rear advert reapplied and looks a little undressed at the moment, see picture below. 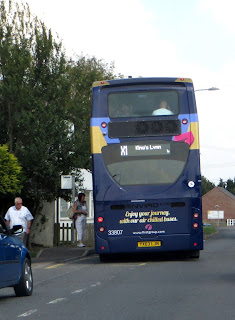 One issue that has been causing concern for sometime are reflections from the passenger saloons experienced by drivers at night. Back in March 2015, 33808/9 were fitted with inverters to the lower deck saloon lights, reducing them by 50%. After further testing, in May 33814/5 were modified to an 80% reduction and this was agreed to still be a safe level of lighting for customers. This has virtually eliminated the reflection problems and feedback is now being received which if positive, will probably result in the modified lighting settings being adopted for the entire fleet.

On the road, the last four weeks has seen more than the usual number of incidents on the A47 resulting in delays and diversions to the X1. There has also been a shortage of drivers at the western end of the route which has even caused a few cancellations which is extremely unusual. As recently as Friday (11th) all three supervisors at King's Lynn had to supplement the rostered drivers to maintain the service. A job to say which was the worst day for delays, but the Friday (28th) prior to Bank Holiday weekend must be favourite. I popped down to see Bruce at Walpole Highway at lunchtime and things were already disrupted. 33805 working the 11.35 from Peterborough came by dead on time at 12.37 (did it terminate at Wisbech I wonder ?) but at 12.51, the 10.35 from Peterborough finally appeared running 76 minutes late with 33813 ! There was no sign of the 12.05 or 12.35 from Peterborough and the next eastbound service came through after 2 hours 5 minutes at  14.56, this being the 13.05 ex Peterborough with 33812 running 51 late - it had only been 16 minutes late going to Peterborough so the traffic congestion had seen it lose a further 35 minutes en route. 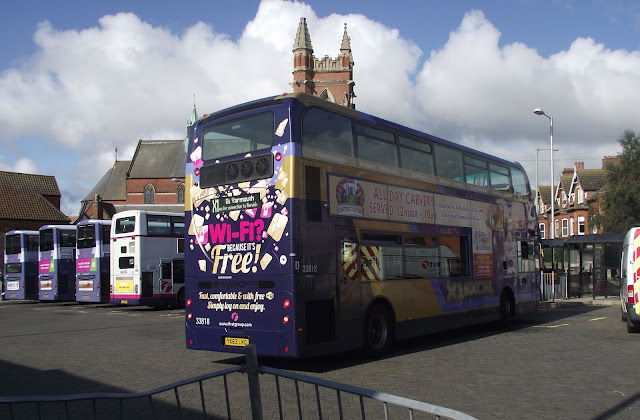 Matthew Holland kindly sent these pictures of 33818 departing from Lowestoft on the morning of September 1st. Note the trio of former X1 Geminis in the bus station and (below) the lengthy destination information. 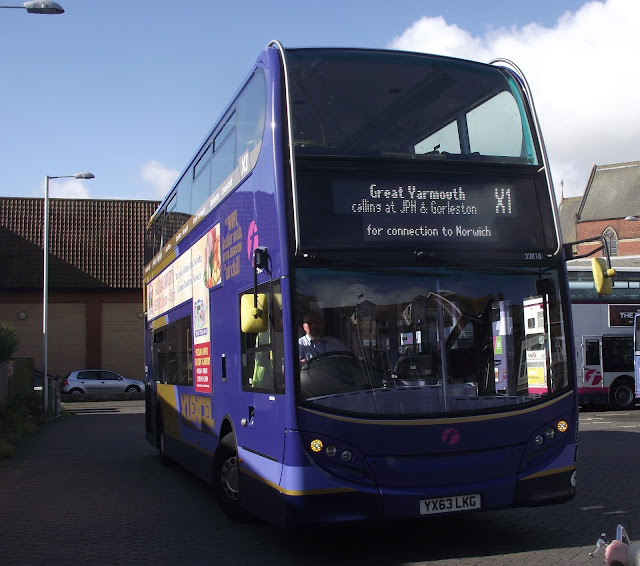 Finally Cameron Robinson was having some fun with 37562 yesterday (12th) when it was being used in connection with the Reload Festival on a Service no.100 from Norwich Thorpe railway station. Something makes me think the blinds may have been tampered with ! 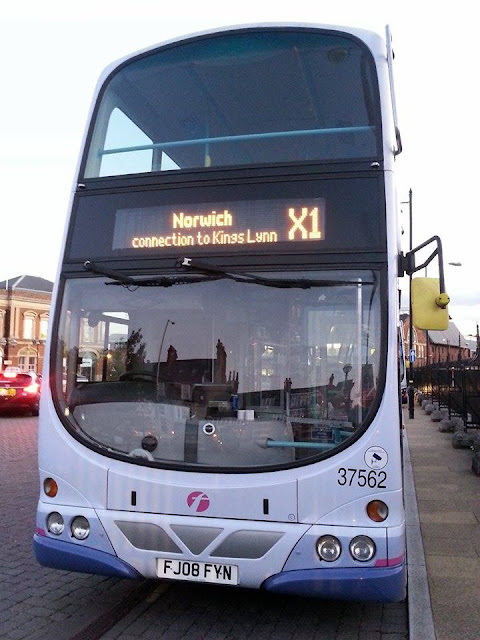 Posted by Gerardtcc at 18:26 No comments: