That shows you should never announce when the next update is going to be. Never mind, here we are and once again things are largely running smoothly.
I had a run out on the X1 on Valentines Day, taking K5-XL11 07.37 King's Lynn - Peterborough. I joined 33813 at Wisbech and we left nearly 4 minutes late. The morning peak traffic seemed particularly heavy and slow. By the time we left Thorney our arrears had increased to 9 minutes. Thanks to a large slice of recovery time however, our arrival at Peterborough bus station via the Passport Office route was just one minute late at 09.01. There being no passengers to join (very unusually) this allowed for a quick chat with our driver, Kevin B. We were on time at the rail station at 09.09. There was one unusual vehicle swap in the evening when 33822 had to be removed from L8-XL14 and 33817 which had arrived in King's Lynn at 20.49 on L12-XL18 for garaging was cleaned and refuelled to work the 21.38 to Lowestoft. A collapsed manhole at Necton caused some delays today and then an accident in the evening saw diversions due to an accident on the A47 between Swaffham and Lynn.

Being in Scotland over the weekend 15/16 February, I had to rely on my contacts to view the service. I am very grateful that 100% of services were viewed and reported and many thanks to all concerned for their assistance. There were no reported vehicle swaps, but for a time on Saturday fallen trees were preventing Toftwood, Little Fransham and Necton being served. Thanks to Kieran Smith for the gen. On Monday services were delayed again by roadworks at King's Lynn South Gates roundabout, one lane being coned off. Queues were back to Hardwick for a time.

My return trip also featured the X1 and I was pleased to see Ray Woodhouse and 33808 turn up bang on time at 21.18 on what was a pretty wild wet Monday evening. Departing at 21.19 and leaving Peterborough via Bishop's Road we passed through Eye Green in exactly eleven minutes and this was followed by a fine flail down the deserted A47 to Thorney. Surely we must be on time now ? No ! In fact we were still just over a minute late. Thorney Toll was passed 3 minutes late and we were back to being just over a minute down at Guyhirn. Arrival in Wisbech was on time to the second. Progress beyond here to Walpole Highway was at a more sedate pace thanks to a less demanding schedule and I was dropped off - the only passenger left on board - spot on time. Tuesday saw a couple of late arrivals in Lowestoft reports Malcolm, 33804 was 8 late in on K19 which does the 11.30 to Peterborough  and later 33812 on L8 due at 15.12  came in 12 late. Temporary lights at East Winch Carpenters Arms were more than likely the cause.

Part of Dereham Market Place has been closed for gas main work and the disruption which started on Monday is due to last six weeks. X1 services eastbound now call at the stop on the Hollywood Cinema side of the Market Place, while westbound services use Cowper Road instead.

Jamie Skinner reports 20514 still operating X1 shorts on Friday 21st and over on the X2 at the start of the week, Yarmouth's 37578 was out, presumably deputising for 37570 which is due an MOT around now, Michael Bryant and Malcolm Hicks both reporting sightings.

Finally I must mention King's Lynn driver Bernie Mactavish who is making a speedy recovery from a heart attack, thanks to the prompt actions of Controller, David Fields, Bernie felt ill at work on December 28th and David realising he was having the attack rushed him to the QE Hospital, an action which saved Bernie's life. Congratulations to David on receiving national recognition for his actions and to Bernie on his recovery .
For the EDP article , check out this link

Well not really, on the contrary I have been extremely busy. Fortunately the X1 seems to be behaving quite well, so this gives me an easy time from the blogging point of view. Here is a summary of recent events :

Monday 3rd February. Not at work today so didn't see much. No swaps with 33814/5 off the road for services and 33820 spare. 33821 working L8-XL14 had a problem with its VIX display - it froze at 14.12 hrs displaying next stop Acle, The Street and remained that way until it finished the turn. Temporary Norwich bus station closure again this evening.

Tuesday 4th February. Malcolm reports 34187 making a rare appearance in Lowestoft on the 10.40 service 1a to Martham. 33813's mileage tonight was 34187 - spooky or what ? Now that Y13-XL19 begins and finishes at Yarmouth, the turn often changes vehicles at King's Lynn for maintenance purposes. Today 33808 was replaced by freshly serviced 33817.

Wednesday 5th February. A quiet day, nothing to report !!!

Thursday 6th February. 33809 had a tacho fault today, so stayed off the road . There was a nice story on the X1 twitter feed about a chap who had lost his wallet on the bus and it had turned up intact at King's Lynn garage. Yarmouth's 33423 had its destination re-programmed to cover X1 shorts today as seen here :

Friday 7th February, 33822/3/4 were all due safety services today and during inspection, 33822 was diagnosed with a line sensor fault. A few services around 09.00 travelled via Wisbech St. Mary due to an accident on the A47. Villagers here have now engaged the services of MP Steven Barclay in their attempts to get the X1 diverted this way permanently. How about a compromise, with one journey an hour going that route ? Mind you, there are some very tight bends on Barton Road and overall the route is unsuitable I would say.

Wednesday 12th February. 37575 found itself on the X2 today, the first time a Yarmouth liveried example has appeared to date. Very high winds brought power cables down onto the A47 near Thorney Toll this afternoon and some services were diverted via Whittlesea,. K15 12.50 King's Lynn - Peterborough was on time with 33824, but the 14.15 return working was seen by Bruce running 42 late as K16. K16 itself didn't go all the way through to Peterborough and came back as K15 running 17 late on those timings. The road was cleared again by 15.50. 33809 had its tacho fault sorted today.

Thursday 13th February : 33808/11/12/19/21 have all been out now every day since the last blog. 33812 has been on the road daily since January 20th.  Temporary route diversions at Thickthorn and in Dereham are scheduled for Monday.

Following the feature on the old rail link coaches in the last blog, Andy James has been in touch to say he also did a similar thing some time ago - the buses seem the same but the pictures are different, here's the link http://andysbusblog.blogspot.co.uk/2012/12/looking-back-1980s-railcoach-link-in.html?m=0

Finally congratulations to friends of the blog Chris Speed and Mark Reynolds for their recent promotions within First. I am away in Scotland for a few days now, so any sightings welcome at the usual address. Next blog on Friday 21st.

Posted by Gerardtcc at 22:56 No comments:

Well I suppose that is good news for 'First' but not so good for writing a blog ! Enviro 33820 has, as expected, gone to Full Circle for body repairs while ENBB and NBP both report the repainting (at last) of 33423, so the likelihood of it seeing further X1 use has diminished somewhat.
The X1 has been running very well with no problems with punctuality and no failures in service either. 33810 has been undergoing repairs for most of the week and only managed to appear in service on Monday, Tuesday, Friday  and today (Sunday).
This lull in proceedings would seem a good time to start our look at vehicles which have traversed the X1 route in the past.
We begin with a look at the rail link coach service which I think began in about 1982. Peter says "Do you recognise this fine looking vehicle ? This was (I think) the original Rail Link service operated by Eastern Counties on behalf of BR.   Originally there were just 4 return trips a day from Kings Lynn to Peterborough.   When Birds took over they increased it to 6, with the first starting at Hunstanton, and the last one from Peterborough going through to Hunny". 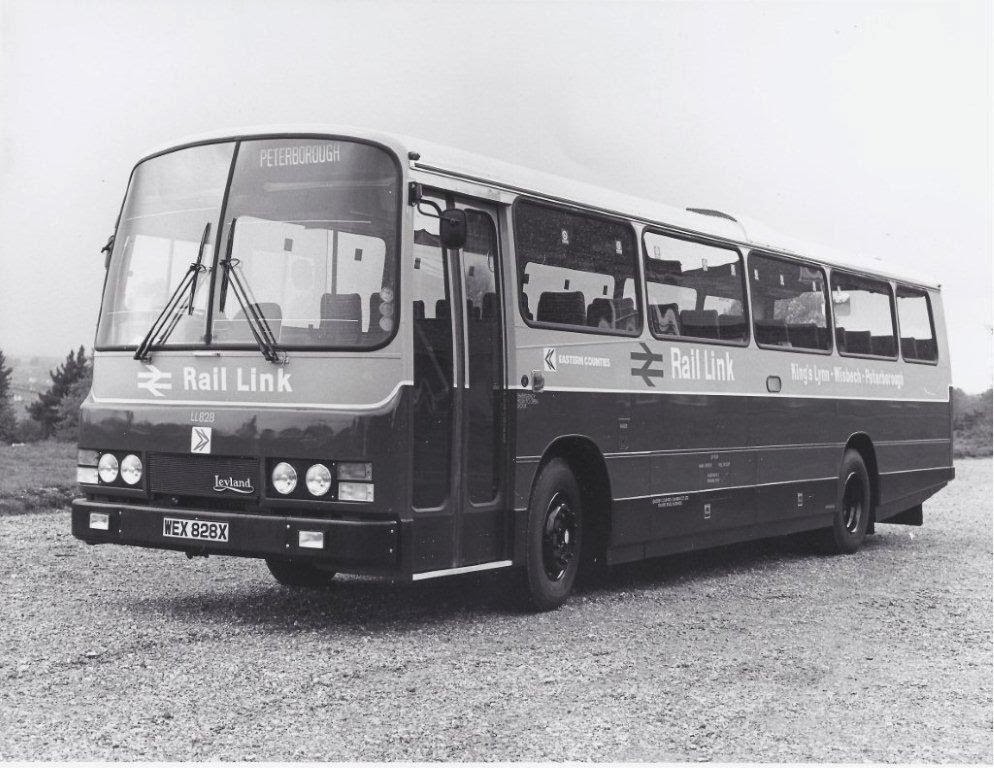 Here is another photo taken in around 1984 of another rail link coach, now with Hunstanton added to the route branding 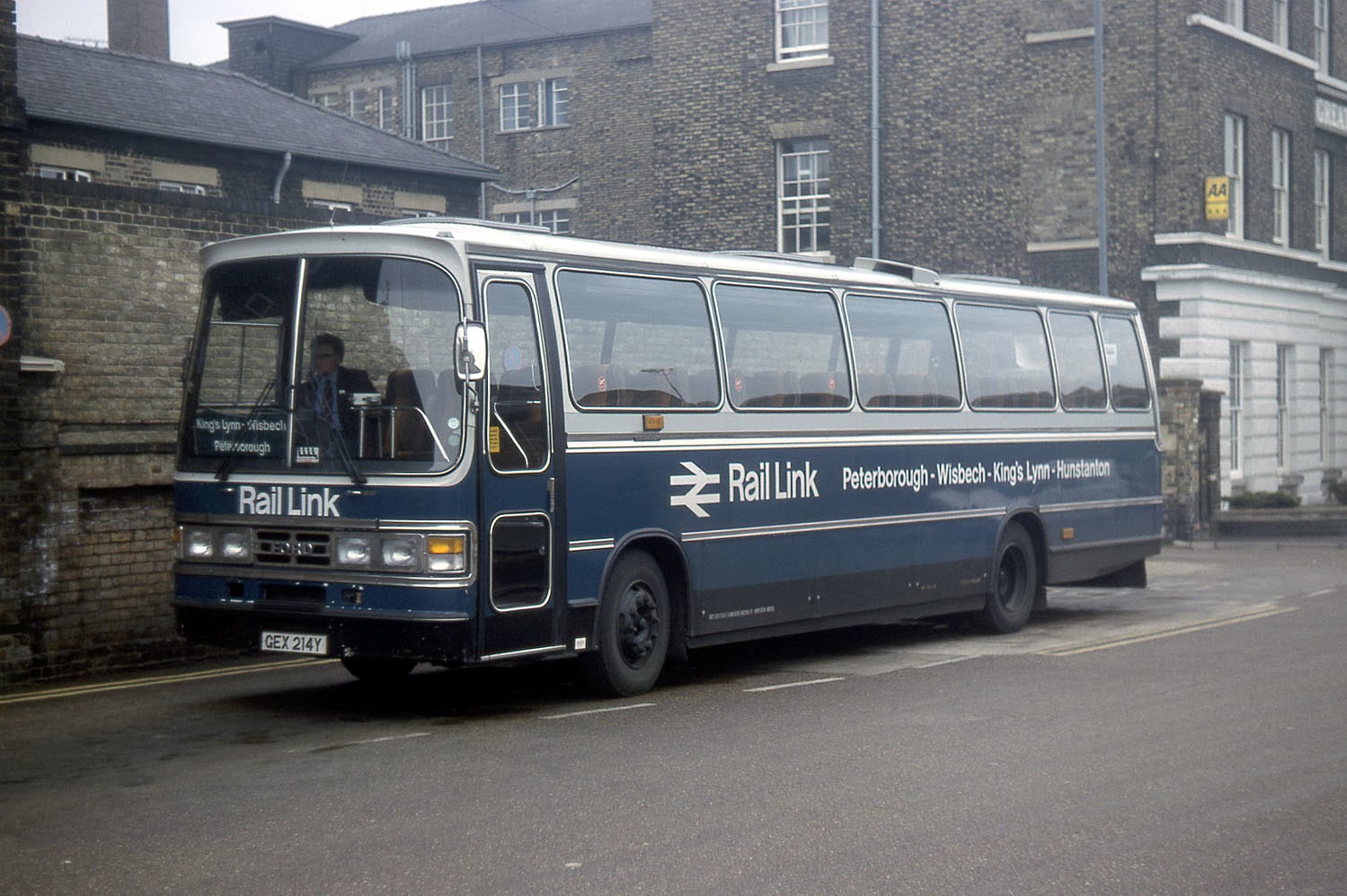 If any of you can add any more detail about the Rail Link service, when it started/finished or the vehicles used or if you have photos I could include etc etc, please contact me and we will do an update.
Posted by Gerardtcc at 00:02 No comments: