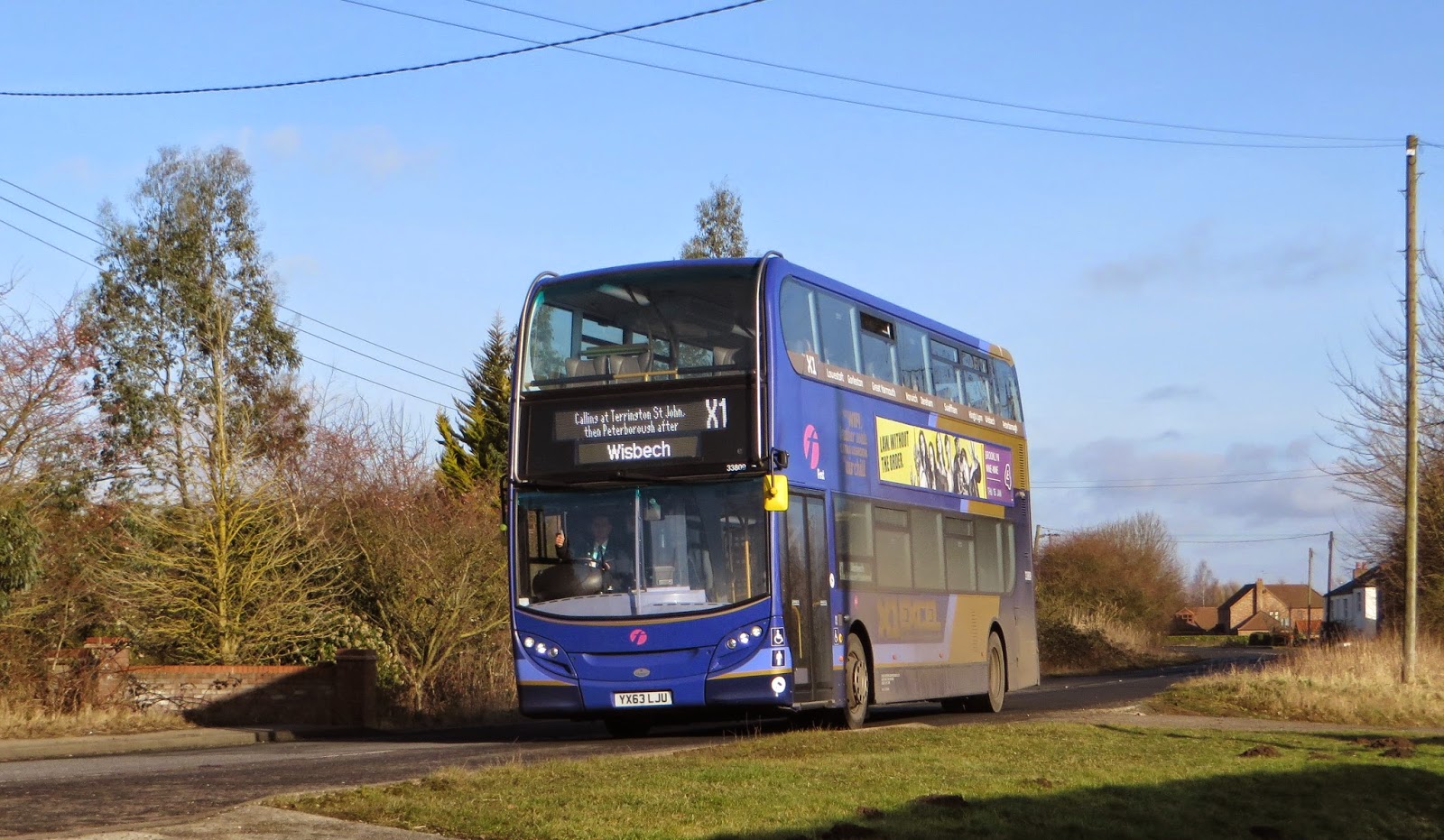 I'm starting this blog entry with a few quotes from last year as they seem appropriate at this time :

9th March 2014 : So what's been going on in the last couple of weeks ? As you'd expect from the lack of an update, the answer is very little. Some of the Enviros have now reached the 50,000 mile mark with little untoward to report.

8th May 2014 : Well here we are at last again just to reassure you that everything has been going very well on service X1. Yes,  the Enviro fleet appear to be every bit as able as their Gemini predecessors at meeting the exacting demands of the route.

2nd October 2014 : Overall it has been a highly successful year for the new buses with widespread acclaim from both the public and bus industry. Despite the switch away  from Volvo, it has to be said that operating problems with the Alexander Dennis fleet have been only what one would expect with a completely new fleet.

Do you get the feeling that there is about to be a but ??  What has happened since the turn of the year ? Firstly one has to say that whatever fleet of buses work the X1, a hell of a lot is asked of them. Even when the most popular and successful buses in the country  are employed, nothing is certain as the X1 is the ultimate test in terms of mileage and availability required.
Now it would be wrong to suggest that breakdowns are commonplace as this is certainly not true and the fleet still receive the same exacting standards of maintenance, however, problems with the Enviro 400 fleet are being experienced. I take my reports from passengers and enthusiasts and while there is no doubt in my mind that the current fleet are the most comfortable and luxurious buses ever to grace this route, questions are now being asked along the lines of "Will they last the course" - this being a reference to First's five year plan. Admittedly the same questions were asked about the Volvo Gemini's which came through the five years relatively unscathed, just look back five years in the blog to find out what was happening then.
This will not make comfortable reading for Alexander Dennis though. Not that I would imagine for one moment that they read this blog, but the X1 blog being independent has never shyed away from such topics - just looking back at the blog in its infancy, one of the first photographs ever featured showed a First engineer pondering at a rather unhealthy Premiere coach by the side of the A47 !
Since the start of the year at least four Enviro 400s have had extended periods away from King's Lynn for repairs and this was before Tuesday night when 33811 expired at Hockering. Ian writes " Went to Norwich yesterday on the X1. Me for free being an oap and Allyson for a very reasonable £11 return. On the way home we were delayed by a broken down X1 near Hockering with gearbox problems". Then on Wednesday afternoon Bruce says "Was having the car washed at the A47 place on Wisbech bypass when I was shocked to see 33811 passing me by on tow heading westbound- what's going on ?". What indeed ?
I have mentioned before about various ailments which the fleet have suffered from, although I am now told that the finer detail should remain confidential which is a bit silly when it appears some passengers know exactly what is going on. So before an embargo is placed on me speaking to anyone remotely connected with buses, I will put on record that I have had nothing but friendly co-operation and encouragement from my many friends at First ever since the blog started and this continues to be the case.  I ought to add that the efforts put in by the staff at King's Lynn (and I daresay at Yarmouth and Lowestoft too) are second to none.
It would be sad for this state of affairs to end, just because reporting facts of the day to day operation of the X1 becomes uncomfortable for some when the going gets tough. As is illustrated above, people tell me things - they always will, it is what makes news, whether it be positive or on occasions negative. The blog was started because of this reason. To me contact is extremely important, that is why you will always see an email address on this blog. So if you have another side to this story and feel I am being unfair to any parties, please get in touch.
On a different subject, I am constantly being asked if  I can put the blog on Facebook. I've thought a lot about this, but have decided for the moment just to post update details on the X1 Passengers & Fans Group on FB. I will be posting a further update on recent events shortly.
Posted by Gerardtcc at 12:02 1 comment:

The past couple of weeks have seen a few Enviros having mechanical problems. Fortunately these have not meant any substitutions by other types of bus and 33818 remains on loan at King's Lynn from Great Yarmouth. Both 33808 and 33817 have been away for repairs, but are now both back at King's Lynn with 33808 re-entering service on 3rd and 33817 expected to follow it soon. In the meantime following a repaint in Excel colours, Gemini 37573 has arrived at Lynn for minor repairs and to have some seats replaced and it may yet see some use at the western end of the route as Enviro 33803 has now been taken out of traffic. This follows it failing on the last Norwich - King's Lynn service in the early hours of Saturday morning. 33803 came to a halt near the A1122 roundabout west of Swaffham and is now away for repairs.
If anything, delays to the X1 have been slightly less conspicuous than is normal in January, A collision between three cars on the A47 at West Bilney resulted in the road being closed for 6 hours from about 16.45 on Friday evening (30th January)which resulted in some disruption. There have also been a few delays due to adverse weather. 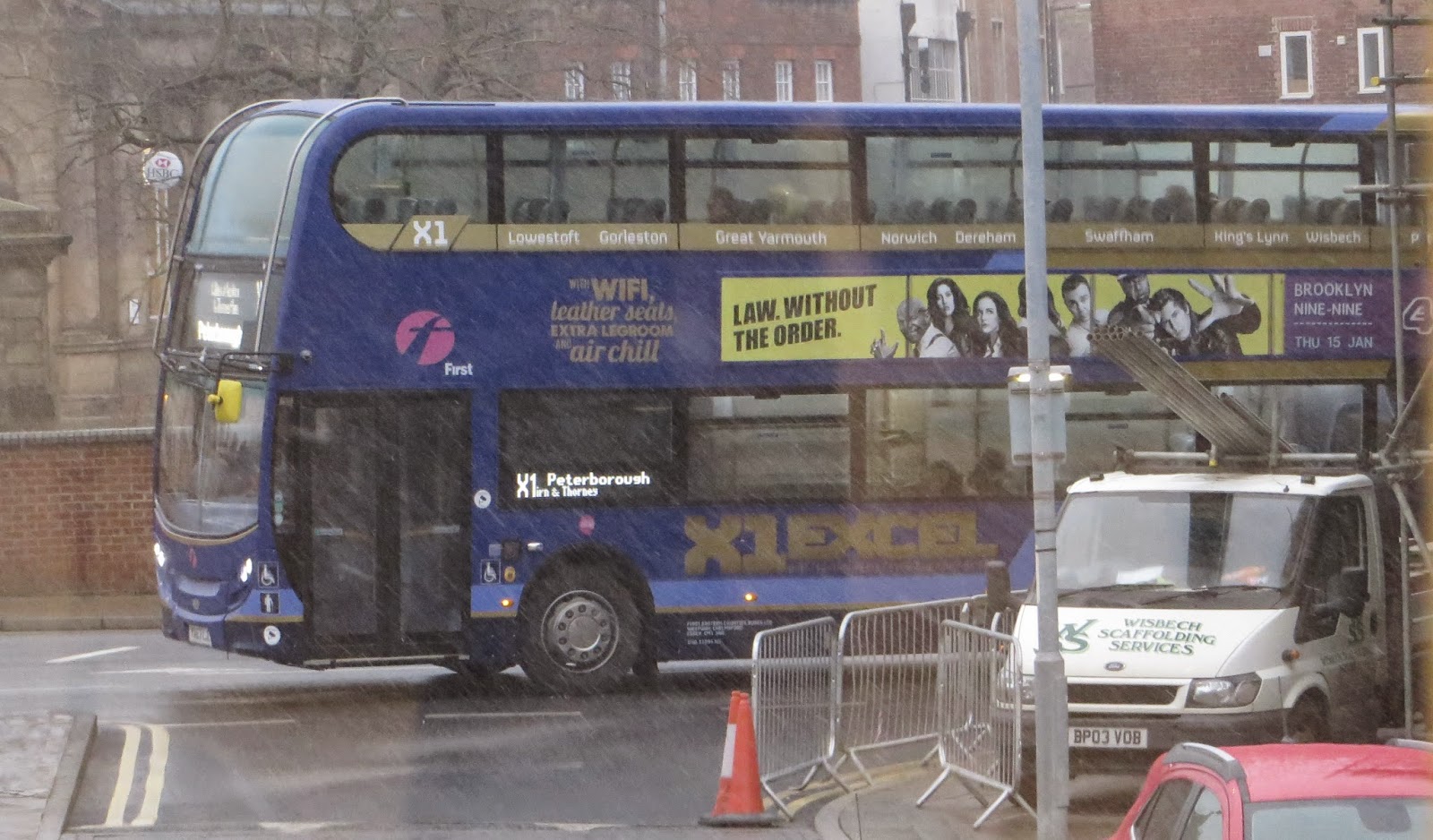 In Tuesday morning's rush hour the combination of the snow and roadworks on Bourges Boulevard meant services were losing time badly at the Peterborough end. The 08.05 ex Peterborough had lost 25 minutes, 33816 on the 10.05 came into Wisbech at 11.25, 35 late with the next service less than 2 minutes behind it. Going west K10 10.44 from Wisbech got away at 11.13 with 33804 but had commendably regained 12 of the 29 lost minutes by the time it passed Walton Highway at 12.50.
Back on 22nd January 33804 was delayed while working K10 11.35 from Peterborough and came through Walton Highway at 12.57, 24 late. The following service with 33809 was just 5 minutes behind it  running on time. Saturday 24th was a challenging day with 33807 cutting out and 33805 with a door problem but both survived the day.
The revised wording on destination displays was event from the week commencing 26th January and at least one service on 29th  as noted departing Wisbech for Peterborough still showing Wisbech on the front. This was not surprising given that this was a new innovation for drivers to remember at various points on route.
Over at Lowestoft X1 variations have been few and far between despite the loan of 33818 to King's Lynn. 32629 was noted departing on the 14.40 on January 14th and the same bus was deputising on 28th. Yarmouth's Royale 34109 has continued to occasionally appear on the Martham services seen by Malcolm on 17th and 19th January and again on 31st.
Single decker vehicles have included ex Yorkshire 62143 becoming a bit of an X2 regular having worked on January 14, 21,22, 26 & 28 and again on February 3rd. Volvo B7L Eclipse 66334 has been out on the Marthams on 17th, 31st Jan & Feb 2 & 5 and this is one of the type reallocated to Yarmouth to replace the 608xx series B10BLE Wright Renowns. Loaned to Lowestoft is South Yorkshire Volvo B10BLE 66112 which was first noted on a contract on 26th Jan before appearing on the 99 next day and then on the 09.10 X2 from Norwich on 30th.  Other sightings have included 60618 regularly on the 1's and 60622 also being seen on the 15.10 to Martham on 23rd. Enviro 200 44513 was pressed into use on the X2 on January 22nd and 28th. 28th was a bit of a poor day for the Lowestoft Enviro 400s with only 33823 being seen by Malcolm, the other turns being Geminis and 33423 plus as already mentioned 32629 helping out.

Posted by Gerardtcc at 17:08 No comments: