The widely leaked news that Stagecoach plan to pull out of King's Lynn was made public this evening. Norfolk Green took over all the local services which were operated by First in June 2011. They were subsequently bought out by Stagecoach in May 2015 and they have gradually eroded the regional identity from their fleet and now it seems obvious why. Who will step into the breach if the Stagecoach plan comes to fruition ? Let the rumour mill start ! 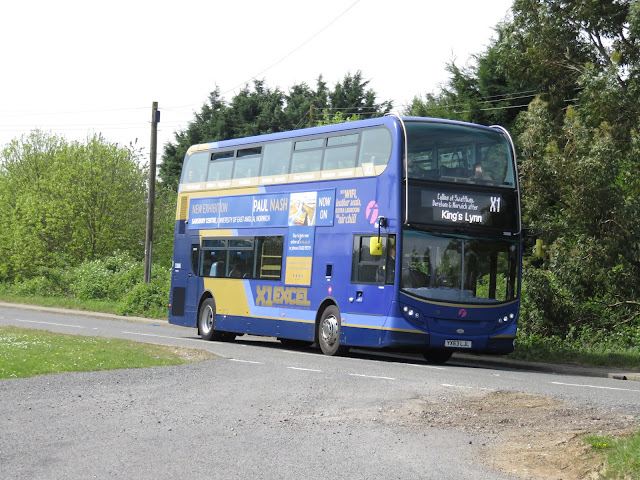 Back to First Group and the new XL timetable from next Sunday has met with mixed reactions. On the operating front, Norwich depot have made inroads into the lines formerly worked by King's Lynn. Three diagrams begin at Norwich, these being the 06.30, 07.00 & 08.40 departures and the first of these also finishes at Norwich. Until now King's Lynn has latterly had 36 drivers for 22 turns (on weekdays), but from Monday this is reduced to 31 drivers for 17 turns. The shortfall is because Norwich now have six driving rosters on the route including three where they work buses through to Peterborough. Three King's Lynn drivers now have diagrams on the University - Rail station service 25 in between XL turns. The King's Lynn drivers will now be working a four day week.
On the timetable front on weekdays, the service largely follows the previous pattern, save the hourly serving of certain villages. In the evening the 15.40 from Norwich now copies the 18.10 and terminates at Wisbech instead of running through to Peterborough. The late bus from Peterborough is retimed to depart 15 minutes later at 22.45.
The Enviro 400s which were due for replacement in September / October now look as if they are going to continue operating the route, possibly for another two years, though of course this is subject to change (isn't it always ?), Certainly they have been behaving a bit better in recent months. This week King's Lynn have begun to remove the gold backed destination vinyls along the bottom of the upper deck windows. The gold lettering is also being removed, some has already gone and reference to the X1 will also go after Saturday. 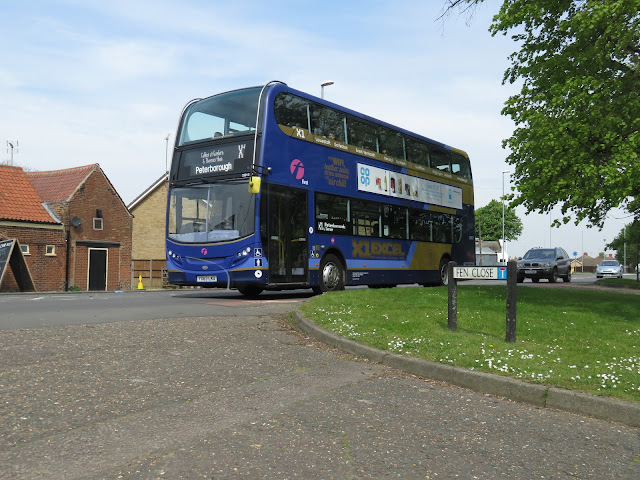 It is not clear at the moment how Norwich depot will be involved with the workings, but a proposal has been made that King's Lynn drivers will do a couple of fill in turns on Service 25 during what would otherwise be layover time at Norwich. Consultation on this between First Group, the employees and the Union are due imminently.
A quick glance at the timetable reveals that residents of Hockering, Tilney All Saints, Terrington St. John, Walpole Highway and Thorney are losing out due to a combination of low patronage from these locations and the need for buses to run punctually with the much higher volumes of traffic currently using the A47. Here the daytime frequency will mirror that of Sundays with these stops being served on an hourly basis, rather than the 30 minute schedule which has been the case for many years.
On the western section, services which run directly from Eau Brink to Walsoken via the A47 will then serve Thorney, while the alternate services serving the villages between King's Lynn and Wisbech will then run directly from Thorney Toll to Peterborough avoiding Thorney village.
In the unlikely event of passengers wanting to travel directly from say Walpole Highway to Thorney, therefore, a change and wait at Wisbech will be necessary. This might seem an unlikely scenario, but I happen to be making that journey this weekend, something which will not be possible without changing in the new timetable.
It should also be noted that the X1 service route number is being abandoned west of Norwich and here the service will simply be called XL. The X1 route number will be kept for the Norwich to Lowestoft section.
I will be reporting on the timetable in more detail when further information comes to hand.
Posted by Gerardtcc at 01:19 No comments: