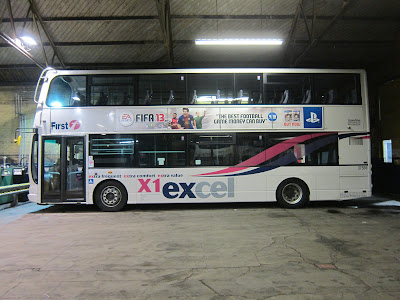 Time for some chaos then and Thursday certainly provided that. A crash at Necton shut the A47 for recovery work from 10.45 until 12.55 badly affecting services. Y13 11.45 King's Lynn - Peterborough looks to have been a non-runner. This turn arrived in Lynn late with 37566 and 37568 then took over later on the 14.32 to Lowestoft. K15 12.45 King's Lynn - Peterborough came through Wisbech 22 late with 37566 (off Y13) having replaced 37568 at Lynn. K16 with the ill starred 37160 fared even worse and set sail for Peterborough 27 late at 14.15. Not sure what time 37579 on K17 went westbound, but it returned 32 late. Several buses changed turns including 37571 which came into Lynn on Y9 at 09.37 and then went to the garage. 571 was available again to work K5 forward to Lowestoft at 10.32, this service had come in with 37574 which was then stopped for repairs including a faulty adblu sensor and airbags. At midday there was a strange carry on when 37578 on L8 arrived in Lynn only to turn round and work K14 back to Peterborough. Similarly, 37564 off K14 promptly went back East with L8. There was still time for one more swap with K2 which was 37573 having a starter problem, so 37569 which itself had been having attention to its adblu sensor was made available for the 15.45 King's Lynn - Peterborough. Finally Des reports 37570 on K4 arriving at King's Lynn about 30 late from Peterborough this evening. Departure to Great Yarmouth was 28 late and even with Mr. Speed at the controls, heavy traffic meant little time was recouped and the service was 15 late from Norwich - this after his inward service Y7 had also suffered on the congested A47, 37156 was 4 late from Lowestoft and 26 minutes in arrears by the time it got to King's Lynn.
There was another fiasco on Friday which brought bus services grinding to a halt in King's Lynn. Emergency surface repairs to the A47 saw the Saddlebow - Hardwick section closed eastbound at lunchtime with diversions via Nar Ouse Way and Hardwick Road. This soon resulted in drivers becoming displaced and some long delays were recorded. To cap a miserable week for 37160, it began the delays and was 20 late heading west on L11. Y13 with 37564 went to Peterborough 15 late but Friday traffic saw it lose a further 10 minutes by the time it came back eastbound. Both K14 and K19 appeared to be victims of the disruption and neither passed Bruce or myself. The delays continued into the evening and L12 which is due to depart Lynn for Peterborough at 20.50 was allegedly 90 minutes late with 37563, so 37160 off L11 worked the turn. In addition to these delays, 37158 expired at 16.00 near Norwich with an air leak whilst working Y9 and fitters had to attend, so all in all, a day to forget.
At least Saturday passed off smoothly with just a single vehicle change reported, this being on K17 which started with 37568 and ended up with 37577. Most services ran well, but 37157 on L11 was 22 late eastbound through Walpole at 13.28. Next day 37566 on the Sunday turn supplied by Lowestoft suffered a broken upper windscreen en route and 37157 was wheeled out to replace it.
The new week began well with just a single swap involving K14 which had 37568 (adblu sensor)  taken off in favour of 37574. The latter had been undergoing heavy repairs since last Thursday. All buses ran pretty much to timetable with a couple of exceptions, these being  37573 on L12 which was 11 late heading west, but 25 late returning past Bruce. This evening the lost time had been regained however and 573 was seen heading home on the 22.10 ex Peterborough in good time. 37160 is really going through a jonah phase at the moment - today she was seen departing King's Lynn 28 late on L11 showing 'Not In Service' on the front but with passengers on board. The service looks to have missed Wisbech altogether ! At Lowestoft there was a surprise when coach 20515 appeared for the 11.15 1a to Martham. X1s viewed by Malcolm included K17 with 37579 which was 19 late in and departed 9 late on the 10.25  westbound.
Finally to Tuesday December 4th and all services ran OK except L11 (again !). 37574 was 19 late on the 11.18 Wisbech - Peterborough. 37159 was returned to King's Lynn garage from Volvo today pending return to service.
Finally Colin White writes "Hi Gerard, here’s something for the blog.

Whilst there are roadworks and traffic lights in the vicinity of the Magdalen Square bus stop a temporary bus stop has been placed outside the Magdalen Way shops but it appears no one has actually told the drivers that it is there. (See photo). 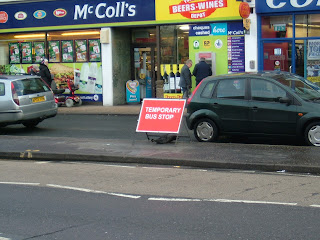 I’ve just witnessed a lady waiting there for the 11.15  X1 and it just sailed past, she had to run up to it sitting in the queue of traffic waiting at the traffic lights. There is no mention of the road works on the First Website so maybe an entry on your blog might help. The road works are due to end this Friday. I have only seen two Service 8 buses actually stop at the temporary one".

Apologies for the paucity of pictures this time - I'm afraid it is past my bedtime. Next blog when I return.
Posted by Gerardtcc at 01:12