Two updates in two days - good grief whatever next ? Well firstly here's a nice pic from Grahame Bessey (http://eastnorfolkbus.blogspot.co.uk/) of the ex Greenline Gem 37274 about to commence its first day working off Great Yarmouth. Grahame says it's not up to his usual standard as the light was very poor, but it looks good to me ! 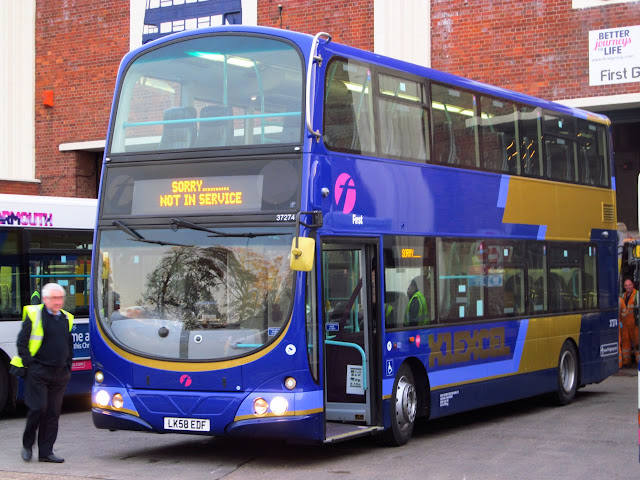 More news from the east is reported by Malcolm Hicks where on Monday 9th 32348 newly repainted in urban livery performed with the 09.40 Lowestoft - Yarmouth X1 while another stranger was 32629 on the 10.40 an hour later.
Richard Adderson wrote to me last week and said " I went out for lunch at Cantley today (3rd Nov) , and was driving towards Thorpe End on the B1140 around 11.50 when I was confronted with an X1 coming the other way (into Norwich), which I later discovered was avoiding the A47 owing to the latest accident at North Burlingham. Fair enough, this had obviously been diverted from Acle via South Walsham, a straightforward alternative.
Later though, around 2.50, I met another Enviro, destination blind Norwich, heading south on the byroad which runs from Blofield, through Blofield Corner up the the B1140. I can only imagine he too had come from Acle via South Walsham, but had chosen to rejoin the A47 at the Brundall roundabout, west of the blockage, and take the normal route into Norwich from there.

The latter makes me wonder how much discretion drivers are allowed in altering their routes to avoid road closures – is there some sort of central control which tells them where to go, when the usual route is unexpectedly blocked, or are they left to their own devices? The earlier bus would have had a straight run on the “back road” from Acle, but would have become ensnared in the city traffic from the Heartsease onwards, while the other would have had a tortuous journey from the B1140 to Blofield but the benefit of dual carriageway as far as Trowse.  Any idea what the policy is with this? Or if not, maybe worth putting the query on the blog one day?
And sorry, no photographs nor bus fleet numbers – I was driving in the opposite direction on both occasions! "
Well over to you dear readers, I know some of you will know the answer or have tales of your own on this subject.

Yesterday (Monday) saw what is (thankfully) an ultra rare spectacle, when two X1s arrived in Wisbech following each other - not even a car separating them - these being 33815 & 33806 working the 13.45 and 14.15 services from Peterborough respectively. The 13.05 service with 33812 had arrived on time at 13.50 but there was then a gap of 74 minutes before the pair of buses turned up at 15.04. This seemed to be an isolated incident and other services ran to time. In contrast, today (Tuesday), the 10.05 from Peterborough was seen arriving at Wisbech 5 minutes early with 33809.

Hi G,
With regard to the closure of the A47 from 10:30 am till 03:00 am and diversion routes.
There is no central control, drivers are just left to deal with it, some better than others.
My preferred route on that day was outward: From Acle to A47, South Walsham Road to B1140, Blofield Heath, Blofied rejoin A47 for normal route into the City. Simply to avoid traffic going into Norwich. Return route is from the bus station, any route to Heartsease roundabout then via B1140 to South Walsham Road onto A47 then to Acle.
At approximately 16:50 that afternoon the traffic queue towards Acle was from Postwick Bridge via Yarmouth Road, Blofield, Lingwood Road, Beighton Road to the A47 at Beighton White House! I spotted a driver at the back at that queue that I knew was the 16:25 ex Norwich. I left Norwich at 17:05 heading for Gorleston Hospital. At 18:40, I had been to Gorleston Hospital and returned to Yarmouth where I saw the 16:25 ex Norwich arriving into Yarmouth!