Thanks to Cameron Robinson we can see 'newby' 37274 at work today on the X1 , firstly at Great Yarmouth and later at Norwich : 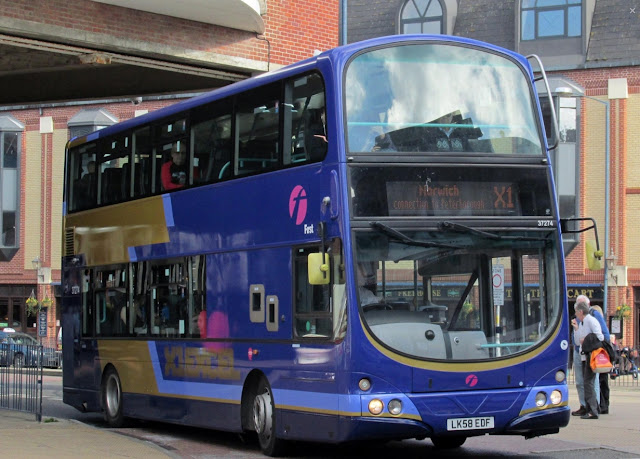 Doesn't look like 37274 will get the disfiguring adverts either ! Cameron also reports that similarly liveried 37578 put in an appearance on the 14.50 service 7 to Belton this afternoon, while 32061 worked the 07.40 Lowestoft - Norwich returning as far as Yarmouth where it was swapped for an Enviro 400. This might possibly have been 33821 which was due to receive a new alternator ar Great Yarmouth today.

In response to Richard Adderson's queries about diversionary routes a driver ( whose anonymity has been respected) says "Just read your latest posting. I think you will get different responses from different drivers on the subject of how much discretion drivers are allowed. One thing to keep in mind is it is my belief that our route is not fixed, just the stops are fixed, although some are missed during major disruptions on the A47.

I can really only speak for myself. Most of the time when one sees X1 buses on secondary roads it is usually due to being diverted by controllers to get around road blockages. Whether a Controller will divert a particular bus comes down to an individual drivers experience. At the Peterborough end of the route  I personally have several ways out of the city if the usual route is blocked or congested, especially during school/peak hour traffic. In the evenings after 1800, drivers are generally left to their own devices, I have been known to take the bumpy little road between Thorney and Whittlesea when the A47 was suddenly closed for roadworks without any notification as an example. So drivers do have some discretion, depending on the time of day and the circumstances" 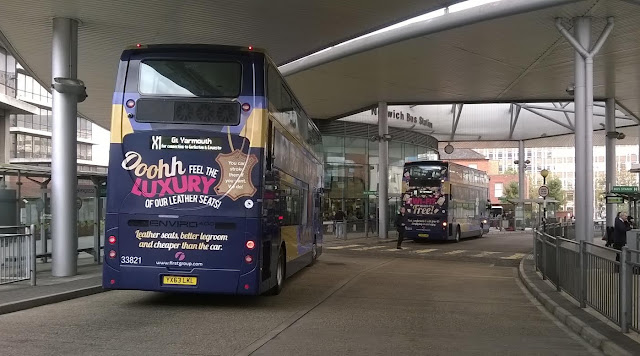 Norwich Bus Station on 27th October at midday showing 33821 & 33822 , one just arrived the other departed a few seconds after I took the photo. Photo : A Nonymous
Posted by Gerardtcc at 23:50