Just when I thought I'd listed all the recent diagram changes, I realised that I'd forgotten to mention Saturday's K1 which now goes to Lowestoft depot rather than Yarmouth. This compliments L8 which now does the opposite.
Steve from Oulton Broad wrote to me this week and says  :
"Hello,  I wonder if I might add to your lists of wants for the new X1 bus fleet and this is very important. Heating upstairs, presently you can tell the difference if you ride on a B7 during a cold spell, they are like toast, but those B9's well I always ride downstairs when it's cold. I went to Northampton last Saturday using the X1 to Peterborough and then X4 to Northampton, and consequently was able to do a back to back with the Gemini and the Enviro 400. Well in my opinion the Gemini is vastly superior. The Enviro wins on speed, but other than that the comfort of the Gemini is much better, even down to the fact that after 3 years and 300,000 miles they still don't rattle".
I wonder if the speed issue might just apply to the B7s Steve ? These have a 49mph limiter, whereas the B9s can do at least 10 mph faster. A few weeks ago I was told that B9 37566 had also been restricted to work at 49mph following its gearbox modifications at Volvo. I am not sure if this has been rectified yet.
Bob also messaged me to say "Tony (Stonechat) and I set off yesterday morning to meet up at Queensgate to catch the 08.44 X1 to Lynn (K4), but it hadn't arrived by 09.00 and more than a dozen people were waiting for it, so we caught the Stagecoach 37 to Spalding and the NG 505 to Lynn.
It was odd, because we had walked down to buy our bacon rolls and Tony saw it arrive, but it vanished, our only suggestions being that it broke down at the Station, or the driver forgot to call back at Queensgate on his way back to Lynn". 37572 was the bus in question and I wonder if any of our readers can supply an answer to this one.
Today 37563/5/8/9 & 37572/3/4/7/8/9 were in use on the X1 and 37157 was sighted by Malcolm working the 10.20 Lowestoft - Norwich X2.
This was the second week of Sunday diversions at Swaffham : 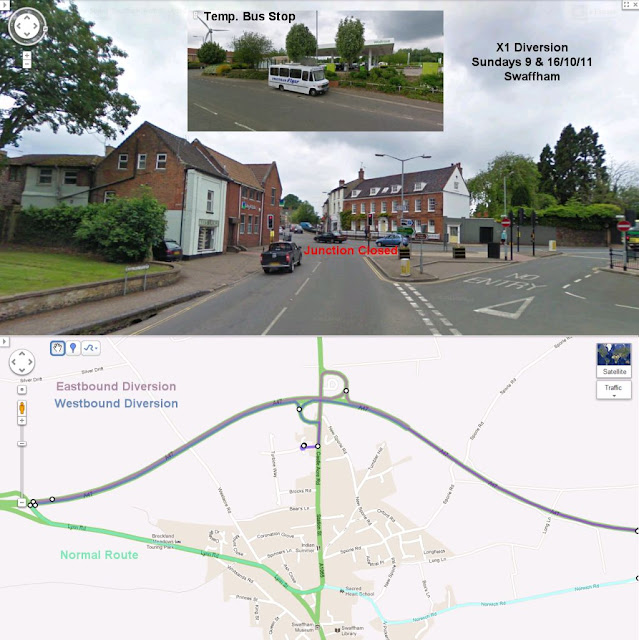 Gerard,re speed of the B7's they can infact be set at 56mph without seat belts,where as the B9's with belts are able legally to be set at 62mph