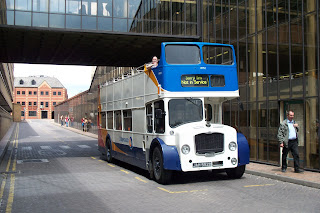 Barely recognisable as the JAH552D which often worked from Peterborough to King's Lynn in the early 1970s, here she waits at Queensgate this afternoon in the sunshine before the rain. 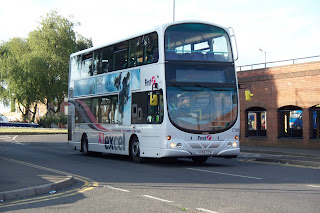 Sponsored by Harry Potter, 37569 arrives at Wisbech this evening on the 18.10 Peterborough - Lowestoft.

Had an afternoon out today to visit Sacrewell Farm where they were having a bus rally. Instead of taking the car decided to X1 it through to Peterborough. Having passed 20103 on the 13.00 to Lowestoft on the way into Wisbech, I waited at the Horsefair for the 13.22 to Peterborough which arrived about 10 late with 37576. The driver seemed pretty intent on making up time, but the density of traffic made this pretty impossible. In the end the journey into Queensgate was accomplished in 34'21" so pretty similar to previous trips and in slightly less than the advertised schedule. I began the journey sitting on the back seat upstairs, but once we got moving, the combination of breeze from the open windows and the fan blower made it feel like I was in a Force 8 gale, so I moved forward a few seats, shut a window and this was much more bearable. Unfortunately a sad little girl called Sian had thoughtfully engraved her initials and motif on the back of the seat I was now facing in bright pink nail varnish. The Lynn cleaning team has been informed !
FLF452 was almost ready to depart for the rally when I arrived at Queensgate and a decision to sit downstairs with Mark C and value the thrash turned out to be the correct one, as passengers on the open top had to abandon the fresh air about half way through the journey due to a downpour. On arrival at Wansford the rain had almost stopped and a pleasant hour or so was enjoyed viewing the exhibits and partaking of coffee and cake before returning on JAH552D. This was allocated to Peterborough at one time and I've certainly travelled on it whilst working the 06.45 Peterborough - King's lynn 336 in the early 70s. (Yes I do feel old writing that !).
Back at Queensgate a decision to reject 37570 on the 16.15 to Lowestoft was made and instead we retired briefly to the Brewery Tap for refreshment. 570 has incidentally acquired the Keep Britain Tidy ad referred to yesterday on the rear. The 17.15 from Queensgate was a reasonably well filled 37577 and I crossed my fingers bearing in mind its failures over the last couple of days. I occupied the position half way along the top deck with a single unopening window. This was undoubtedly the most comfortable position I have found on a Gemini and the journey back would have been a pleasure had it not been for some inconsiderate passengers, one continuously on his mobile who kept saying 'I don't know where I am but I'm near King's Lynn' ! This as we passed through Thorney and again approaching Wisbech. In addition another youth with an ipod somehow managed to fill the top deck with his own personal taste in dance music to keep us amused (not). At least had this been on the FLF, the engine roar would have drowned out the bassline. Another delay free journey saw us roll into Wisbech slightly early in 35'28".
103 would appear to have been the only B10M out today, but Y4 which begins the day at Yarmouth and finishes on the 20.10 Peterborough - Lowestoft had B7 20352 today. Only other thing of note was 37566 on the 20.50 Lynn - Peterborough which I can confirm sounds positively unhealthy still.
I have now established recent mileages for all the B9s so here are the results rounded to the nearest 1000 miles.
80 : 564, 568, 573 & 579.
77 : 563 & 577.
76 : 569.
75 : 567
72 : 570 & 576
71 : 572 & 575
69 : 574
66 : 578
63 : 566
59 : 565
The mileage amassed by 37579 is quite extraordinary as it was one of the last B9s to enter traffic on November 11th last year. At the other end of the scale all those achieving under 70k have seen periods out of traffic and 565 is lagging behind considerably now.
Posted by Gerardtcc at 23:59