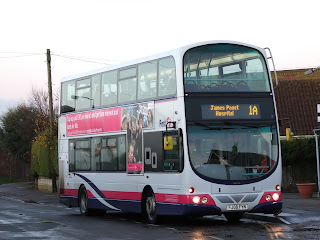 Grahame was testing his new camera this morning and there is certainly nothing wrong with it if this fine photo is anything to go by. This is 37562 (oh yes it is) at Scratby this morning.

With Christmas beckoning, it was only to be expected that heavy traffic would take its toll on X1 punctuality and that's exactly what happened today.
Main news of the day though concerned the long awaited appearance of 37157 on the route. This did L12 and was 8 late from Wisbech going west and 23 late returning. Surely only a matter of time now before 37156 joins the throng. This will also presumably mean less frequent appearances by substitutes and today 34108 worked Y6 this morning and after a change of vehicle at Lowestoft 20107 did the afternoon part of the turn. 60863 was still about and this was on K16. Last night it disgraced itself by running out of fuel at Wisbech before departing on the 22.22 to Peterborough and this has happened before when it has worked Y13, only on the previous occasion it happened at Peterborough.
60863 was only about 5 late on the 13.15 King's Lynn to Peterborough, but clearly there must have been an A47 incident, because it was 46 late arriving at Wisbech on the 14.35 Peterborough to Gorleston and this had increased to 61 minutes in arrears by the time it was viewed by Bruce at Walpole Highway. Subsequent services were also delayed with K17 and 37579 25 late, K18 with 37567 16 late and K19 with 37576 a more respectable 5 late. For some reason 37567 was removed at Lynn and K18 looks to have gone forward with 37159. 159 returned on the last leg of K19 instead of 576.
K4 with 37568 was heavily delayed this evening and it was 28 late at Terrington St. John, but this had been reduced to 14 minutes on its return.
L8 is believed to have had the aforementioned 37159 taken off at Lynn this morning and 20106 then had a fling to Peterborough on the 09.15. Another B7, 37158 relieved the B10M at 13.02 and this was 13 late this evening, not helped by foggy conditions around Wisbech. Maintenance was carried out on 37564 at Lowestoft and 37573 at Lynn today and despite this Yarmouth even had the luxury of a spare vehicle. Grahame says "37562 was out and about around Yarmouth today, firstly this morning on the 1A to the JPH, it then later worked an X1 shuttle to Norwich and finished the day on the 6's to Bradwell!". Great stuff !
Posted by Gerardtcc at 23:58