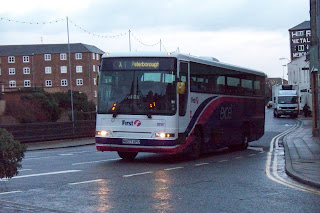 It was still quite dark at 08.50 this morning when I photographed 'The Beast' 20107 leaving Wisbech westbound. Can someone suggest it is nominated for a CBE or similar if it survives until 31/12/10 ? (CBE = Coach of the British Empire). 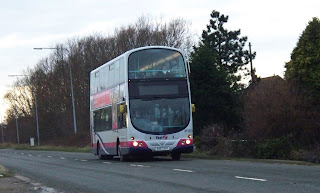 37157, one of Lowestoft's recent acquisitions, had two consecutive trips to Peterborough today. Here it is running 5 minutes late on the 13.05 from Peterborough (Y13).
New Year's Eve and time for reflecting on what a year it has been, or not as the case may be. Traffic was quite light today and this even led to some untypical early running. Examples included 37567, 3 early into Wisbech on the 08.35 Peterborough - Lowestoft (K4) and this evening 'The Beast' 3 early at Walpole on Y6 19.05 Peterborough - King's Lynn. This service and L8 terminate at Lynn in tonight's early close while K17 and K19 both end at Lowestoft.
Not surprisingly then, punctuality was possibly the best of the whole of 2009 ! No services (and all turns were seen) ran any more than 5 minutes late. It all went like clockwork and with only one unexpected change. Y13 with 37157 was changed at Lynn at 14.30 with 37157 making a second trip to Peterborough on K19 instead. This is thought to have been a positioning move to get the B7 to finish at Lowestoft and 37575 (or possibly 37579) the other vehicle involved to finish at Lynn. 37568 had the day off at Lowestoft, but all other B9s were seen through Wisbech except 37571/5/9. Speaking of 37571, I will try and ascertain how progress is going with this one.
Time now then to do my acknowledgements for the year. As regular blog readers will be aware, this blog would not be possible without the valued aid of one Bruce Billingham. X1 diversions have meant that on many occasions I have not seen a single service and Bruce has diligently monitored proceedings, probably with Tina, Louise and Claire all thinking he has gone totally mad. Many's the time he has forgotten to have breakfast because he has been involved with witnessing an X1 farce. This week incidentally, he has had a well earned break from observations to regain his sanity and families respect.
Many others - literally too numerous to mention - have made the blog what it is. Special mention should be made of a dozen or so 'First' employees who enjoy contributing to and reading my ramblings, then there are our friends in the Far East, the two Michaels, Sam and Grahame, as well as at this end the loyal band, namely John W, Andy, Peter, Angela, Doreen, Derek, Cheryl, Ian, Judith, Suzanne, Pat, Mark, Neil and Ros. Then not forgetting further west Rob Brooks and the two Jamies. Numerous others get involved and thanks also to those of you including our friend Jim Long who provide photographs to make the whole thing more interesting. Not forgetting - well those I've forgotten ! Remind me and I will give you a mention. Always a dangerous thing, making lists. Have a very happy 2010 you all and don't forget that the one you see is probably the one that the rest of us have missed !
Posted by Gerardtcc at 22:49

Happy New Year from X2 land! I guess I'd better analyse the year and get a blog online...
Sam